Peter And The Wolf Story

This is the story of Peter And The Wolf. Peter lives with his grandfather. He is only six years old. Their house is by a forest. The grandfather has a cat named, Ivan and a duck called Sonya. One morning, Peter walks into a big, green field. Little Peter decides to go on a hunt in the forest.

He arms his popgun and starts his journey. Once, he heard about a wolf who used to tease all the people so he decides to hunt him and set the people free from its terror. But, his grandfather is afraid because Peter is a small boy. In the night, when the grandfather is fast asleep, Peter makes a plan to slip out of the home. He is very happy to finally go for hunting. Soon, Sonya and Ivan join him in his journey to protect Peter from the bad wolf. Also, read Peter Pan Story For Kids. 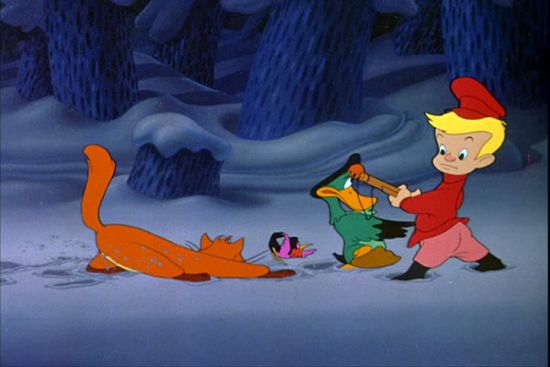 peter and the wolf

“Peter! Peter! What are you doing? There is a wolf in the forest,” says Peter’s grandfather. “I am not afraid of a wolf!” says Peter. Peter and his grandfather go home. Suddenly, a big wolf comes out of the forest. The little bird flies into a tall tree.

But the duck, Oh no! The duck is out of the water. The wolf eats him. Peter is very angry at the wolf and so he comes running. Peter has a rope. The little bird helps Peter. The bird flies around the wolf’s head. Just then, Peter puts the rope around the wolf’s tail. He finally catches the wolf! They will take him to the zoo.

Two big, strong men take the wolf and walk to the zoo. Peter and his grandfather walk with them. The little bird who helped them flies over them. “Who is afraid of a wolf?” asks Peter. “Not me!” he laughs. But Peter, Ivan, and Sasha are sad about Sonya. When they go back home, they hear “quack! quack!” behind a hollow tree. Sonya is hiding behind the tree and she is safe.

So now, Peter becomes a hero and he saves everyone from that bad wolf. Everybody lived happily ever after – everybody, that is, except the wolf! You may also like to read, Tarzan Story.

Here is a visual depiction of, “Peter And The Wolf Story”. See the video story below,

Peter And The Wolf Story Video