This Peter Rabbit Story has been adapted from the works of Beatrix Potter. Once upon a time in the woods, near a small village lived four little rabbits. Flopsy, Mopsy, Cotton-Tail, and Peter were their names. The four little rabbits lived with their mother. They lived under the root of a giant fir tree in a sandbank.

One day when mother rabbit was going to the baker’s she told her children to go out and play. “Now my little one,” she said, “you may go down the lane and play. But be very careful and don’t go to Mr. McGregor’s garden.” Mother rabbit sighed and sadly continued, “You all know that your father had an accident there, don’t you? You remember that he was put into a pie by Mr. McGregor.” Mother rabbit warned her little ones and set off with her basket and umbrella. 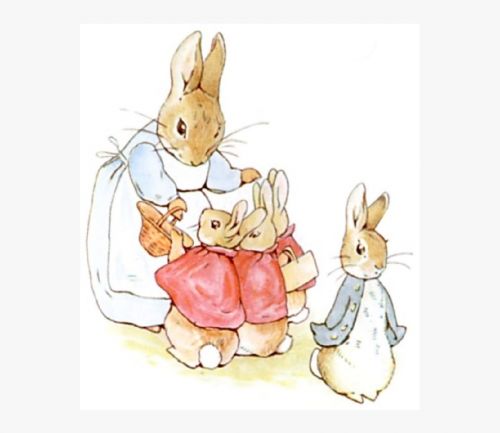 “One loaf of fresh brown bread and five currant buns,” she told the baker. Meanwhile, the little rabbits went out to play. Flopsy, Mopsy, and Cotton-Tail were good rabbits. They obeyed their mother and went down the lane as she had told them. There they gathered blueberries. Peter was a naughty rabbit. He was determined to go to Mr. McGregor’s garden.

He decided to go alone. So he left his brothers and went to the garden on his own. When he reached the garden, he squeezed himself through a hole in the gate. The garden was huge and was overflowing with vegetables. First, he ate some lettuce and after that, he ate some French beans. And after that, he feasted on some radishes. After eating all of these, his stomach was quite full. He felt sick.

Also, read The Tale Of The Sun And The Moon.

Peter was now trembling with fear. He hopped around the garden, for the poor bunny had forgotten the way to the back gate. In a hurry he bounced from one patch to another, he lost one of his shoes to the cabbages. And the other he lost among the potatoes. After losing both of his shoes, Peter ran faster using all his paws.

He was so busy avoiding Mr. McGregor that he forgot to look ahead and ran into a gooseberry net. Peter was caught by the large buttons of his blue coat. He struggled and struggled but could not free himself. “Mr. McGregor will surely catch me now.” Peter started to cry. Peter’s cries were overheard by some sparrows nearby. They came to Peter and found him stuck in the net. “Don’t give up, little rabbit. Push yourself, we are sure you’ll be able to break free.” And so Peter struggled, he saw Mr. McGregor coming towards him. Mr. McGregor had a sieve, he wanted to strap little Peter. Peter wriggled out just in time and ran off leaving his blue jacket behind.

Peter saw a tool shed ahead, without giving a second thought he rushed into the tool shed. He jumped into a can. Once inside, Peter realized it had been a mistake to pop inside the can. The can was filled with water. He was drenched and shivering.

Peter sat down to rest for a moment. He was tired, he was frightened and he was very damp from sitting on the can. After resting, Peter began to walk around the garden. He didn’t go fast, he was trying to find a way out of the garden before Mr. McGregor found him. Peter found a door but it was locked.

He looked around and saw a fat little mouse scuttling with some peas. “Do you know the way to the gate?” he asked the mouse. But the mouse had a large pea stuck in her mouth, she could not answer. She shook her head. Peter began to cry. Peter wandered around looking for the gate. The more he wandered around, the more confused he became.

You may also like, King Midas And The Golden Touch.

He came to a pond with goldfish. A cat sat ready to pounce on the fish. Peter didn’t bother them, he had heard about cats from one of his cousins. Peter heard a strange noise. He went under the bushes and looked but found nothing. Then he climbed upon a wheelbarrow and he saw Mr. McGregor hoeing onions. Mr. McGregor’s back turned towards Peter and beyond him was the gate!

Now, Peter carefully climbed off the wheelbarrow and made a run for the gate. He ran as fast as his legs could carry him on the straight path behind the black currant bushes. Mr. McGregor saw the rabbit and called after it but Peter did not care. And he did not look back. He ran furiously, his eyes were set on the gate.

At last, Peter slipped underneath the gate and ran off into the woods, to safety! Mr. McGregor hung Peter’s coat and shoes on a pole as a scarecrow. Peter did not stop running until he got to the big fir tree! Peter was extremely tried he flopped down on the soft sand in the rabbit hole and fell asleep.

Mother rabbit was busy cooking. “I wonder what he has done with the jacket. This is the second jacket he has lost!” she thought. Peter became very sick in the evening. His mother put Peter to bed with some tea and then gave him some medicine. Whereas his brothers, Flopsy, Mopsy, and Cotton-Tail had delicious bread, blueberries, and milk for supper.

Here is a visual depiction of, “Peter Rabbit Story”. See the video story below,