Pinocchio And The Good Fairy

This is the Pinocchio story for kids. Once, there lived an old carpenter named Geppetto. He had no family and was quite lonely. Since he was quite poor, he would find leftover wooden logs and create something new out of them. One night, he found a large wooden log and took it home. Throughout the night, Geppetto worked on the log and carved a young boy out of it.

By the time he was done with it, it was morning. “My, my! What a beautiful boy I’ve made. I wish he had a heart! Then he could be my son and I would call him Pinocchio,” thought Geppetto. A good fairy who knew that Geppetto was a very nice man overheard him and suddenly, the wooden boy spoke up. Geppetto was surprised but overjoyed. He hugged Pinocchio and told him that from that day he was Geppetto’s son. 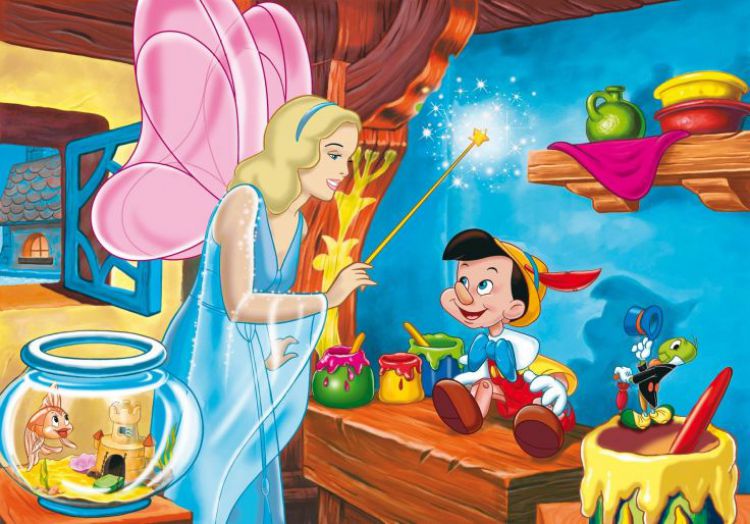 Geppetto arranged for Pinocchio to go to school. To buy him his book, he sold off his dear chisel. “Now you can go to school like a real boy!” said Geppetto to his son. One morning as Pinocchio was going to school, the evil puppet master stopped him. The puppet master wanted to own Pinocchio so he could use him to earn lots of money. “Hello, Pinocchio! Do you want to go to the Fun Island? It is a wonderful, magical place where you can become a real boy,” he asked. Pinocchio was overjoyed at the idea of going to Fun Island. He quickly started walking with the Puppet master.

The good fairy who had been watching over Pinocchio suddenly appeared. Seeing her, the evil puppet master ran away, leaving Pinocchio alone. “Where are you going Pinocchio?” asked the good fairy.  “To school, good fairy,” replied Pinocchio. Just as Pinocchio said the lie, his wooden nose grew longer. “That isn’t the way to the school, Pinocchio,” told the good fairy. Afraid that he had been caught, the boy decided to lie again and said, “It’s a new route!” With the second lie, Pinocchio’s nose grew even longer.

Now, he was very sad and started crying. “I’m sorry! I won’t go to the Fun Island. I’ll go to school,” cried Pinocchio. Seeing how sorry Pinocchio was, the good fairy did her magic and turned his nose into its normal size again. Pinocchio thanked her and dashed off to school.

Once he reached to school, he told all his friends about the Fun Island. All his friends decided to go and see this magical place. What they didn’t know was that the magic in Fun Land was evil. It turned little boys into donkeys! “Oh no! We are in trouble. Everybody run from here,” Pinocchio commanded.

Just as the boys were figuring a way out of the island, Pinocchio saw Geppetto swimming towards the Island. He had been out looking for Pinocchio all day! But to Pinocchio’s horror, before Geppetto could reach him, a whale swallowed him up. To save his father, Pinocchio also jumped into the sea and went straight into the whale’s stomach. There, he saw Geppetto and hugged him. They decided to tickle the whale from inside till it threw them out. Soon the whale sneezed and threw both of them out. Also read, Pinocchio And The Talking Cricket.

Pinocchio helped his father and all his friends to get back to the village. The good fairy had been watching him all this time. “Pinocchio, I’ve seen what a good boy you have been! Jumping into the sea to save your father like that! Hence, I’m giving you a heart and making you a real boy,” said the good fairy.

Pinocchio and Gepetto were overjoyed. They hugged each other and thanked the fairy as Pinocchio really turned into a boy.

Here is a visual depiction of, “Pinocchio Story For Kids”. See the video story below,