This is Pocahontas Story. Once, there lived an adventurous young princess named Pocahontas. She loved running free throughout the land she called home. Pocahontas and her friend Nokoma spent many hours exploring together. Floating down the riverine, they were in awe of the untouched beauty around them. Pocahontas would even leap from the peak of a tall waterfall! The princess was a free spirit always on the lookout for adventure. More about Pocahontas.

Whenever she found herself troubled, Pocahontas would consult a mystical tree named Grandmother Willow. “All around you are spirits, child. They live in the earth, the water, the sky. If you listen, they will guide you,” the wise tree would say. While Pocahontas gazed out over the tops of trees, she saw billowing white clouds. But these clouds were unlike any she had seen before. They were actually the sails of a large wooden ship. 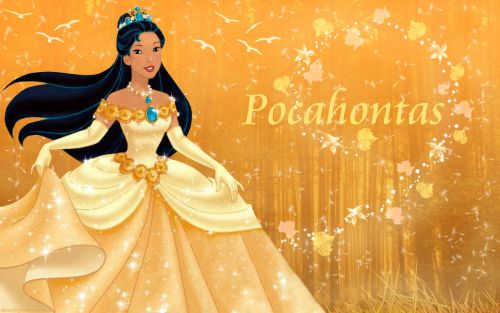 Pocahontas watched from afar as the ship, with it’s many strangers, came to shore. The men abroad were settlers on a hunt for gold, and they believed that they could claim this new land for themselves. But one of the men, John Smith, seemed kind and gentle. Pocahontas followed him through the forest, until he suddenly spotted her!

Though she knew she should be cautious of strangers, Pocahontas stepped forward. And as the two came together, a magical breeze swirled around them. They could suddenly understand each other’s language! Even though they were very different, Pocahontas and John became friends. You may also like –> Princess Tiana Story.

while exploring, Pocahontas showed him what Grandmother Willow had taught her: Things in nature are connected- they all are one. when Pocahontas introduced John to grandmother Willow, he was very surprised! But the great spirit told Pocahontas that John had a good soul. He was a man she could trust.

However, tensions were building between Pocahontas’s tribes and the settlers from John’s ship. Neither group trusted the other. Pocahontas tried to encourage her father to talk to the strangers, but the Chief wouldn’t listen.

One night, John met Pocahontas in Grandmother Willow’s glade. He wanted to protect Pocahontas and her people. They two kissed. They had fallen in love. But as they embraced, warriors from Pocahontas’s tribe arrived and captured John! Pocahontas visited him later in secret. “No matter what happens! I’ll always be with you, forever!” John Smith said. Also read, Princess Merida Story.

The next day, as the tribe prepared for war with the settlers, Pocahontas bravely stepped forward to tell her father that she loved John Smith. Hurting John would only mean more war. The Chief listened to his daughter and freed John instead. But John was injured; he had to return home. Pocahontas wanted to go with him, but she knew that her tribe needed her. “I’ll always be with you, forever,” Pocahontas said as she kissed him good-bye.

Here is a short visual depiction of  “Pocahontas Story“. See the video story below,