Princess And The Pea Story

This is the princess and the pea story for kids. Once upon a time, there was a powerful queen who was used to getting what she wanted. She accepted nothing less than the best, and she wanted nothing but the best for her son.

She only clothed him in the finest suits, only fed him gourmet foods, and hired the smartest teachers in all the land to educate him. So when it was time for him to be married, she told him, “Son, you deserve the best woman in the whole world. Don’t settle for just any pretty face. A prince must be married to a princess.” she told him, as he listened intently. 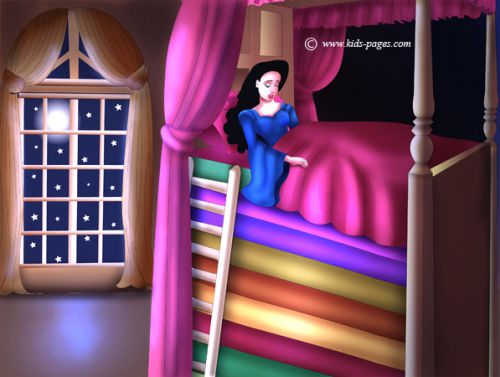 “A real princess is not just the daughter of a king and a queen. A real princess is delicate and refined and eats only the finest foods. She is well educated and reads only the greatest books and poems. She wears the loveliest dresses and carries herself with grace and dignity. But the first thing you will notice, a real princess has the voice of an angel.” said the queen. With that, the Prince set off with his servants in search of his princess.

After traveling for several days, he reached another Kingdom. When he came to the castle, he introduced himself as the prince of the neighboring kingdom. When he met the king and the queen, they were immediately impressed by how handsome and polite he was, and thought that it would be a good idea to introduce the prince to their daughter, a princess who was not yet married. You may also like, The Snow Queen Story.

They brought the prince to the princess’s study, where she was busy reading poetry as a servant fixed her hair. The prince was happy to see that she was very beautiful and she smiled at Prince as he greeted her. When the princess replied, her voice was very hoarse and cracking. He decided to leave from there. As he left, he felt bad for leaving so abruptly, but he reminded himself of what his mother taught.

The good part was that it was actually not late at all. The Prince had plenty of time to set out for the next Kingdom where he again met the king and the queen. Again, he was so charming that he was immediately invited to meet the unmarried princess of the Kingdom. This time, the king and queen led the prince to the castle’s dining hall.

This princess was also very beautiful but when the prince entered, she hardly looked at him as she was busy eating like a pig with food dripping from her face and hands. He decided to leave from there as well. He continued on, through valleys and over endless stretches of plains, but at each castle, he met only disappointment.

Finally, the prince gave up and returned home, still unmarried and very disappointed by his very long journey. When he arrived at his own castle, his mother and father greeted him. The prince told the whole story of his journey to his parents. His mother was especially sad for him, but also glad that he had not chosen to marry any of the princesses he met. Also read, Princess Belle Short Story.

That night, during a terrible thunderstorm, there was a knock at the door. A servant went to answer the door, and a young woman stood outside, dressed in a heavy cloak, soaking wet from the rain. The prince happened to be walking past, but when he heard the voice of the young woman he stopped in his tracks.

She explained to the servant, “My driver got lost in the rain and we saw the light from your castle. Would you be kind enough to provide us shelter for the night?” She had the voice of an angel, and the prince knew immediately that this must be his princess. He quickly ran up and excused the servant. The prince welcomed her to stay by bowing respectfully. “Allow me to take your coat,” the prince said. When she pulled the hood off her head, the prince thought that she was the most beautiful woman he had ever seen in his life.

The prince was so excited, he ran to tell his mother what had happened. But she scoffed. The prince argued with his mother but his mother had faith that she was not the princess. The queen could see that her son had already fallen for the girl, so she quickly devised a plan to get rid of her.

She decided to take the woman’s test. She ordered the servants to place twenty of the softest, fluffiest, most luxurious feather mattresses in the guest tower. Then she took a single, uncooked pea, and put it right in the middle of the bed. The prince escorted the guest to her room, where she needed a ladder just to get onto the bed.

In the morning, the prince went into the dining hall and peeked inside to get a look at his love. She looked terrible. She had dark circles under her eyes and was sipping a large cup of tea. “I am so tired! Please don’t tell the prince but the bed is awful, it felt like there was a brick inside it. I didn’t sleep a wink all night.” said the princess.

The prince rushed over to her side and knelt before her and proposed to her. The princess looked shocked but then smiled and said, “Yes, I will marry you, as long as I don’t have to sleep on that bed ever again.” The next day after the princess got a good night’s sleep without a pea to disturb her, the prince and princess were married and they lived happily ever after.

Here is a short visual depiction of  “Princess and the pea story“. See the video story below,

Princess and the Pea Story video