This is the story of Princess Elena Of Avalor. Princess Sofia discovered a secret library filled with real-life stories that needed happy endings. Now, Sofia is the story keeper and she is in charge of making those endings happen. One day, the library show Sofia a book called “The Lost Princess Of Avalor“. “Like my Amulet of Avalor?” Sofia wonders.

Suddenly, a wizard appears. “Exactly like your amulet.” he says, “I’m Alcazar. I was once the royal wizard of the Kingdom of Avalor.” Alcazar tells Sofia his story. “Forty-one tears ago in the Kingdom of Alavor, there lived a princess named Elena,” he begins. “One day, her Kingdom was invaded by an evil sorcerous named Shuriki. Elena bravely challenged Shuriki which gave me time to protect her sister Isabel and her grandparents. The Amulet of Avalor protected the princess from Shuriki by pulling Elena inside it!” 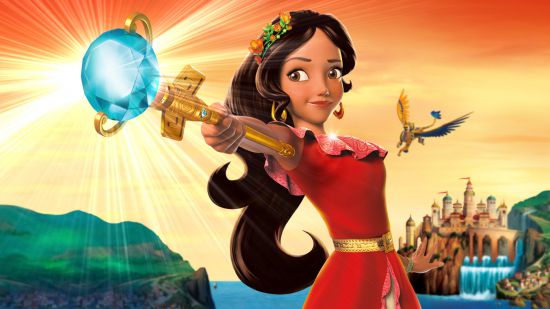 Image Source–> www.sky.com. “So Princess Elena is trapped inside my amulet?” Sofia asks. “Yes!” Alcazar replies, “And you are the special princess who was chosen to free her.” Sofia has to help Princess Elena. So she hurries to find her family. Somehow she has to convince them to travel to Avalor. When Sofia’s mom and dad say yes, she is so excited but she is nervous, too. She hopes she will be able to free Elena once they make it to Avalor.

Avalor City is the most amazing Kingdom Sofia has ever seen! Alcazar told her to find his old house and then summon his spirit guide. When Sofia and her family arrive at the dock, Queen Shuriki and Chancellor Esteban are there to greet them. Shuriki smiles and the crowd cheers but the people don’t look very happy. “It is an honor that you have chosen to visit my humble Kingdom,” Shuriki says. Then, she invites Sofia’s family to the palace.

Everyone is having lunch on the terrace when some strange creatures fly overhead. “They are Jaquins!” a servant explains. “Magical creatures that are the symbols of Avalor!” Suddenly, the jaquins swoop down and grab food off the table. Shuriki is furious. “Get out of here, you pests!”

When the others go inside the palace, Sofia stays back. “Excuse me!” she calls to the jaquins. “Can you help me?” “We don’t help friends of Shuriki,” one of them says. But when Sofia tells them she came to rescue Princess Elena, the jaquins are surprised. They thought Elena was gone forever. “We’ll do anything to help Princess Elena,” declares a jaquin named Skylar. Si, Sofia asks them to take her to Alcazar’s house.

When they get there, she meets Mateo, Alacazar’s grandson. He offers to help rescue Elena, too! Mateo has been practicing to become a wizard and summons a spirit animal named Zuzo. So that was what Alcazar meant! Zuzo tells Sofia she has to steal Shuriki’s wand. Then she needs to find the statue of Aziluna in an ancient temple. When Sofia places the wand and her amulet on the statue, Elena will be set free!

Back at the palace, Sofia convinces Shuriki to dance with her. Then she takes Shuriki’s wand. With the wand held tight, Sofia heads to the temple inside in an enchanted lake. The statue must be in the water! Soon, Sofia turns into a mermaid. As she starts swimming, the statue begins to rise up out of the water. Sofia wraps her amulet around the wand, places it on the statue and then Princess Elena appears!

“I knew you would free me, Sofia. Thank you!” she cries. “You’re welcome,” Sofia says putting her amulet back on. Elena takes Shuriki’s wand, “Now it’s up to me to free my kingdom!” They fly to the palace but Sofia’s jaquin can’t keep up. So, Elena had to face Shuriki alone.

In a Throne Room, Elena notices a mystical painting of her sister and grandparents! “That’s how Alcazar protected them,” Shuriki snarls. “He put them in an enchanted painting, even my magic can’t touch!” Shuriki grabs back her wand and then tells the guards to seize Elena. But Skylar burst in and flies Elena out of the palace. “I want her captured by nightfall!” Shuriki shouts. “Her and that little Princess Sofia.”

Sofia’s parents protest but Shuriki tells her guards to lock them up. Sofia and her jaquin catch up to Elena and Skylar and they go back to Mateo’s house. When Sofia asks Elena what happened, Elena shakes her head sadly, “I tried my best” she says, “but Shuriki has your family.”

Just then, Mateo’s mother arrives with her friends who heard about Princess Elena’s return. As Sofia looks around, she can see that Elena’s friends would do anything for Elena. “We can all face Shuriki together,” Sofia says. So, Elena comes up with a plan.

For the first part of the plan, the jaquins distract Shuriki so that Elena and Sofia can sneak into the palace. Inside, they run into one of the castle’s servants. He’s just as happy to see Elena as everyone else is. So he helps the princesses to find Sofia’s family and together, Sofia and Elena free them. “Now it’s time to save Elena’s family,” Mateo says.

Everyone rushes to the Throne Room. Mateo uses one of his grandfather’s spells to free Elena’s family from the painting. “Isabel!” Elena cries, hugging her sister. “I missed you so much!” Sofia is so happy for Elena. But they still need to find Shuriki and take back the Kingdom. It’s time for the final part of the plan.

The jaquins lead Shuriki outside to find Sofia, Elena, their families, and the entire City of Avalor ready to face her- together. “Leave my palace at once,” Shuriki commands. “This was never your palace,” says Elena. “You can’t stop all of us!”

Shuriki smirks and says, “I don’t have to stop everybody. JUST YOU!” She lifts her wand but Chancellor Esteban grabs it right out of Shuriki’s hand. “It’s the source of her magic,” he says tossing it to Elena. Elena snaps the wand in half. “No!” Shuriki cries. With the magic powers gone, she turned into an old woman and then runs away!

Also, read The Princess And The Frog Story

Avalor’s free once more! “All hail Princess Elena of Avalor, the rightful heir,” shouts Chancellor Esteban. “Princess Elena!” the people cheer. “Thank you, Sofia!” says Elena. “I couldn’t have done all this without a brave and clever friend like you!”

As soon as Sofia and her family return to Enchancia, she hurries to the Secret Library and tells Alcazar what happened. “You helped give Elena’s story an excellent ending,” he says. “Actually,” she tells him, “I have a feeling Elena’s story is just beginning!”