This is one of the best short stories for kids, Rabbit and Lion story. Once upon a time, there was a dense forest, which had lots of animals and birds living it. All the animals and birds lived in perfect harmony. No bigger animal or bird ever killed a smaller one for food. However, there was one exception, and that was the king of the jungle- an evil lion. The lion hunted around the forest at all times and killed animals for food.

One day, the animals could not take it anymore. So they got together for a meeting. “It’s unbearable! He is killing so many of us, that one day this forest will not have any animals,” said the bear. So, all the animals under the leadership of the elephant decided to approach the king. “Your majesty! You are killing so many of us throughout the day, when you need only one for food.” said the elephant. “We suggest you kill only one of us each day,” said the wily fox. 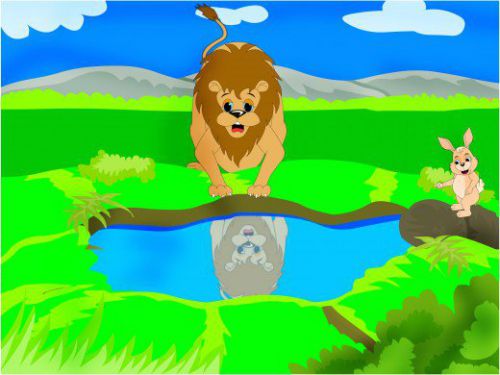 The lion thought for a few minutes and said, “Fine! One of you will come up to me each day as food. The day you do not turn up, I will kill all of you.” The animals agreed. From that day, one animal would leave his family to go to the lion as food. This went on for many days, till one morning it was hare’s turn to go to the king.

The intelligent hare was walking to the lion’s den, when he saw a well on the way. Suddenly, a bright thought struck him, and he almost ran to the den. Seeing him, the lion roared and said, “I was wondering where you were!” The hare replied, “Master, I was on my way to your den. But on my way, we were stopped by another lion who said he was the king of the jungle. He called you a fake and wanted you to fight him to prove your supremacy.”

The lion was livid with rage.He said, “Bring him here and I will teach him a lesson.” But the hare craftily persuaded him to go to the place where the other lion lived. He guided the lion to the well and asked him to look inside. The foolish lion looked at his own reflection and thinking it was his competitor, jumped inside, and that was his end. All the animals rejoiced at the intelligence of the hare.

Here is a short visual depiction of one of the best short story for kids, “Rabbit and Lion story“. See the video story below,