Rabbit And The Falling Sky

This is The Sky Is Falling Story for kids. Once, a hare was lying asleep in a grove of coconut trees. Suddenly, a ripe coconut fell down on the ground making a loud noise. Hearing it, the hare woke up startled, “Oh! The sky is falling!” At once, he started running frantically.

Minutes later, another hare saw him and asked, “Why do you look so scared?” “The sky is falling!” shouted the panicked hare. Hearing this, the other hare too joined him. With time, many more animals joined them. Even the lion saw the vast number of beasts running crazily. You may also like to read, Chicken Little Story For Kids. 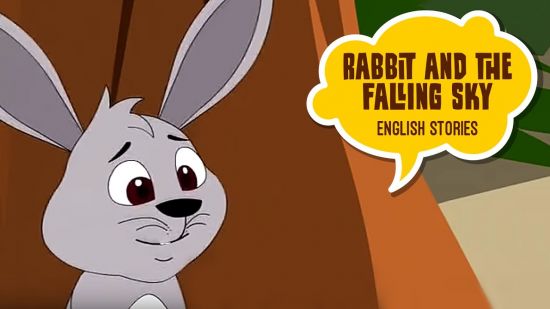 Then, he roared loudly. Hearing the roar, the animals stopped. Soon the lion learnt of the matter. He understood that there was some misunderstanding, because as he looked up the sky, it wasn’t falling. “Has anyone seen the sky falling?” he asked.

Trembling, the hare stepped forward and told the lion what he knew. Hearing this, the lion said, “Show me the place where you were asleep.” Afraid, the hare pointed to the tree where he was asleep. On inspecting the place, the lion saw the fallen coconut fruit. Then, he told the beasts what he had seen and added, “My dear hare, you should have looked around before creating such a hue and cry.” The hare was embarrassed and asked everyone for forgiveness. You may also like to read, The Dog And The Rabbit.

MORAL O THE STORY: DO NOT JUMP ON THE CONCLUSION WITHOUT CHECKING THE REAL TRUTH AND DO NOT BLIND FOLLOW ANY PERSON.