This is the Rainbow Snake Aboriginal Story for kids. In the dreamtime, the Earth laid still. Nothing moved, nothing grew. It was all bare!

One day, the Rainbow Serpent awoke from a long sleep under the ground. She traveled all over. Wherever she went, she left the marks creating rivers where she moved and lakes where she slept. She returned to the place she first woke up and called out to the frogs. “Hey, friends, come out! come out!” she cried. You may also like to read, The Legend Of Pineapple. 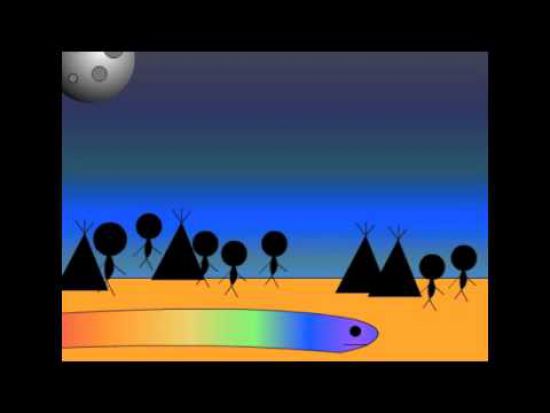 Immediately, the frogs came out slowly because they were full of water. As the Rainbow Serpent tickled their bellies, the frogs laughed and laughed and let all their water out. Running across the land, the water filled the rivers and lakes. From the water, the grass and tree grew up.

Later, some of the animals became disruptive and caused trouble. “Those who follow my laws will be rewarded and given human form. And those who break my laws will be turned into stone forever,” declared the Rainbow Serpent. Even after giving the warnings, many animals broke the laws and soon turned into mountains and hills.

Even after giving the warnings, many animals broke the laws and soon turned into mountains and hills. On the other hand, those who kept their laws were turned into humans and were given the totem of the animals they once were. Tribes knew themselves by their totems: Kangaroo, emu, carpet snake, and many, many more.

At that time, no one starved. “A man must not each from their totem, only of others,” was the only condition to survive. That way, there was plenty to eat for everyone. The tribes lived together on the land given to them by the Rainbow Serpent. They knew that the land would always be theirs and no one could ever take it from them. Also, read The Origin Of Star Apple.

Here is a short visual depiction of the “Rainbow Snake Aboriginal Story”. See the video story below,