This is one of the best bedtime stories for kids with pictures. One sunny day, a traveler was walking with his backpack. He was very tired and wanted to rest but could not find a single tree around. He kept walking and walking until he reached a garden filled with lovely trees and flowers. Also, read The Priceless Gift.

“Many miles without trees and suddenly a beautiful garden here. How foolish the creator must be,” thought the traveler. The trees were filled with oranges and other juicy fruits. The traveler heartily feasted on the fruits. 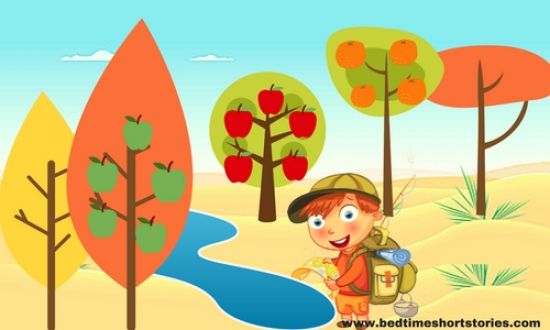 As he was eating, he observed the pumpkin patch which was next to the orange tree. There were huge pumpkins lying on the ground. “Look at them, round and huge yet on such a thin, flimsy creeper. That too on the ground! The orange is so small yet on such a huge tree, up so high. For sure, nature is stupid! The creator of all these things seems to know nothing at all. What a bad design,” he criticized.

He mocked at the creation around him. As he kept talking, he slowly dozed off. In some time, he was in deep slumber and snoring loudly. Suddenly, there was a thud on the traveler’s head. The traveler woke up frightened and confused. He looked around frantically trying to figure out what it was.

As he looked around him, he saw an orange lying by his side. What had fallen on him was just an orange. Suddenly, the traveler realized something, “What if the pumpkin had fallen on me. I would have been crushed. A pumpkin should lie on the ground for sure. There is a reason why every creation is the way it is,” he said to himself walking through his journey. You may also like to read, The Creation Story.

MORAL OF THE STORY: THERE IS A REASON BEHIND EVERY CREATION.

Here is a short visual depiction of one of the bedtime stories for kids with pictures “Reason Behind Nature’s Creation”. See the video story below,