This is the Rip Van Winkle Story for kids which has been adapted from the works of Washington Irving. Once upon a time, in a small dutch village at the foot of Catskill Mountains, lived a man, Rip Van Winkle. Rip was an extremely lazy man.

His favorite pass time only included going to the inn with his friends or enjoying his time alone in the woods at the foot of the mountains. Even as a child, Rip had hated working. Every time his mother found him a job, he could not keep it. “What will you do my little child?” Rip’s mother would worry. But somehow, Rip Van Winkle had grown up and managed to get married. Although, his activities remained the same as the ones in his childhood. He never could keep a job and enjoyed his time alone. Also, read The Story Of Ferdinand. 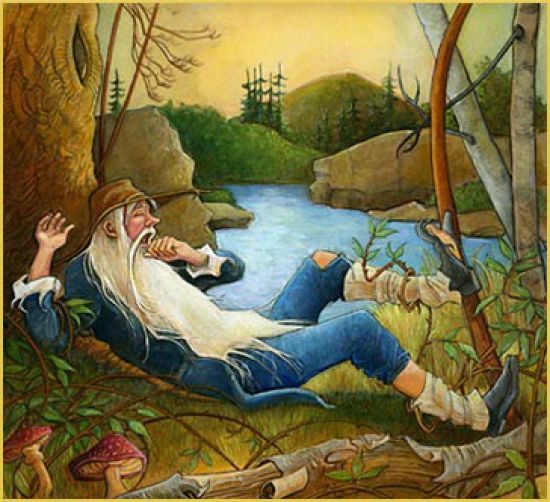 Image Source–> in.pinterest.com. Even though Rip Van Winkle was loved by the villagers and children alike, he still could not find a job. Rip was popular among the kids as he liked repairing their broken toys. One day, when Rip’s wife began nagging him about a job, Rip ran away from his wife taking his dog along with him. As Rip Van Winkle was walking up the Catskill Mountain, he meets a man who was lugging a keg up the mountain.

Now, Rip Van Winkle helps the man and joins him with his friends. Hence, he ends up spending his time playing games and merriment. After all this, he becomes extremely tired and falls asleep, in that very spot. You may also like to read, Stone Soup Story.

When Rip wakes up, he finds everything quite different from when he went to sleep. “Oh dear, I think I slept out here all night! What will I tell my wife? She is going to get angry again,” Rip thinks, looking around. Rip calls out to his dog numerous times, but the dog does not come running to his master.

So, Rip decides to go back, “the dog must be chasing a squirrel or something. he’ll find his way back.” As Rip sluggishly made his way home, he saw different things. Even the village seemed different somehow, almost unrecognizable. “What is happening?” he became puzzled.

When he entered the village, he did not see even a single known face. And what was more, all the villagers were looking at him with awe and surprise. Poor Rip Van Winkle did not understand anything. Worried about how everything had become so different overnight, he walks as fast as he could to his home. “My wife will probably have the answers to this strange phenomenon,” he thinks.

But, when he comes to his house, he sees that it had almost fallen apart. The roof was caving in, the windows were all falling apart and the door too was falling off its hinges. There, he found a woman who looked like his wife. Also, read The Selfish Giant.

So, Rip goes to her and says, “Who are you?” She tells him her name and at once Rip realizes it is his daughter. He becomes happy, but before he could say anything she tells him, “My father disappeared almost twenty years ago. Ever since then, I haven’t seen him or our dog. My mother died a few years ago.”

“But..” before Rip could finish his sentence and tell her, “I am your father,” the girl went away. Only now, Rip Van Winkle realized the terrible mistake he made. All his life he had been lazy, because of his laziness. Now even his daughter did not recognize him. The villagers who had loved him had also forgotten him. If only he had worked hard from the very beginning today he would have been happy with his family. You may also like to read, Pandora’s Box Story.