“Rock A Bye Baby” is one of the most popular lullabies for kids. This poem is known to be first written on American Soil. Though there is no fixed date of its publication, some sources claim that it was written in the early 1500s. Later, it was first printed in Mother Goose’s Melody in London in the year 1765. From then, many versions of this nursery rhyme had appeared with different lyrics! Read on to know more about the actual Rock A Bye Baby Lyrics. Also, read All The Pretty Little Horses.

It is said that this beautiful lullaby had been written by a pilgrim who sailed to America on the Mayflower. Throughout his journey, he noticed how the Native American women rocked their babies in birch-bark cradles which were hung on the branches of the tree. It was placed in such a way that it was allowing the wind to rock the baby to sleep. The sailor had put the whole scene in the words beautifully. Read on and sing along! 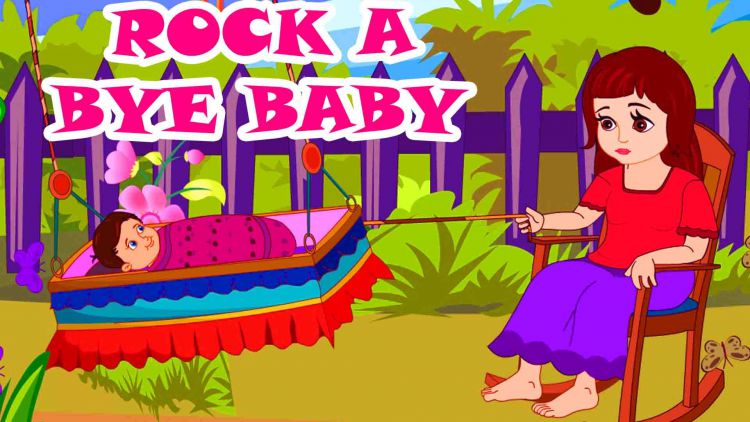 Baby is drowsing
Cozy and fair,
Mother sits near
In her rocking chair.
Forward and back
The cradle she swings,
And though baby sleeps
He hears what she sings.

Hush a by baby
Up in the sky,
On a soft cloud
it’s easy to fly.
Angels watch keep watch
Over as u sleep,
So hush a by baby
Don’t make a peep.

Rock a by baby
Do not u fear,
Never mind baby
Mother is near.
Wee little fingers
Eyes are shut tight,
Now sound asleep
Until morning light.

This is a poem about a mother and a baby who wants to make her baby sleep. A mother is gently rocking her baby to make him sleep on the treetop. During the breeze, the cradle is rocking on its own making the infant sound asleep. But if the cradle will fall, mamma assures the baby that she’ll catch the baby.

Now, the baby is all set for sleep, he’s cozy and drowsy. Mamma is sitting on her rocking chair and she is swinging the baby’s cradle while she sings. The little baby hears what her mother sings and smiles in his sleep. Mother says to her baby that the angels are looking at you. So, don’t peep and have a sound sleep. The mother tells her baby not to fear when mamma is near. The baby shuts his tiny eyes and goes to sleep!

Poems should be an integral part of your child’s growing process as they make their lives more colorful and vibrant by adding a variety of rich experiences. So, every child should be encouraged to read more and more poems.