Rooster And The Donkey

This is one of the really good stories for kids with moral. A long time ago, a Rooster and a Donkey used to live together in a jungle. Both of them were very good friends. The Donkey enjoyed hanging out with the Rooster. In the time of need, they used to help each other.

One day, both of them went a long way in the jungle in search of food. Soon, they spotted a lion in front of them. Both of them got scared on seeing the Lion. Before the Lion could spot them, they hid in the bushes. In the fear of Lion, they remained hidden and waited for the Lion to leave. Also, read The Miller, His Son, And The Donkey. 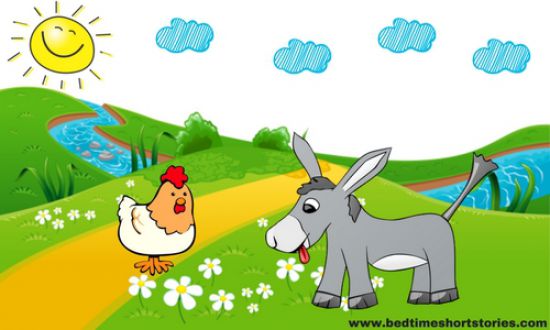 After some time, they noticed that a Goat was eating grass in a field opposite to them. The Lion also saw the Goat and slowly moved towards it. On seeing the Goat in trouble, the Rooster said to the Donkey, “Look, friend, the Lion is progressing towards the Goat to hunt it. We should help the Goat!”

To this, the donkey replied, “How can we help the Goat? That lion is so menacing. It will kill us before we can do anything!” The Rooster replied to the Donkey, “It will be better for us to try something instead of doing nothing!”

Just when the Lion was about to nab the Goat, the Rooster crowed out loud. On listening to the crowing of the Rooster in a sudden, the Lion freaked out and ran away. The Donkey felt happy for the incredible use of intellect by the Rooster. The Donkey thought to himself, “Wow! The Lion got scared by the Rooster! I should kick this Lion out of the jungle. Like the Rooster, I will also get some fame.” You may also like to read, The Clever Rooster.

The Lion turned back on hearing the braying of the Donkey. Finally, the Lion realized that it was not a dangerous animal that was in pursuit but a Donkey. The Lion got extremely angry at itself, “I’m running from a donkey? I have haunted so many donkeys before. It is the most foolish amongst all that is running after a Lion. Its time is up!”

Before the Donkey could think about taking any action, the Lion grabbed and killed it. The Donkey died because of its foolishness. Also, read Androcles And The Lion.