Row Row Row your Boat is one of the most popular English nursery rhymes for children. This song was published in the year 1852. It is also considered as the ‘action rhyme’. The children sit opposite to each other and row forward and backward with joined hands. Also, read Johny Johny Yes Papa.

It is believed that the song has been originated from the American Minstrel Show. When the song was first printed in the year 1852, the lyrics were a bit different but the music was completely different. After two years, it got reprinted again with the same lyrics but different tune which all of us use today. This version also makes your child aware of many animals and its sounds. Read on and sing along! 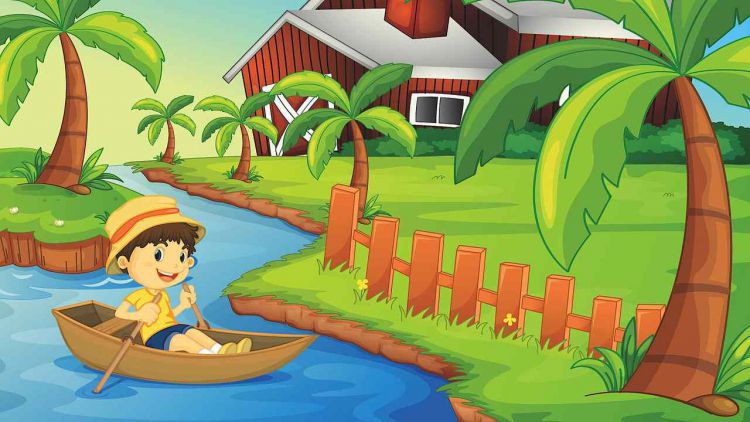 Row, row, row your boat
Gently down the brook,
If you catch a little fish
Please let it off the hook.

Row, row, row your boat
Gently down the creek,
If you see a little mouse
Listen to it squeak.

Row, row, row your boat
Gently down the river,
If the river gets you wet
Don’t forget to shiver.

Row, row, row the boat
Gently to the shore,
If you see a lyin’ bear
Don’t forget to roar.

Row, row, row your boat
Watch the water flow,
Rowing’s fun but rowing’s hard
That is what I know.

Row, row, row your boat
Gently down the lake,
Don’t stand up and rock the boat
That’s a big mistake!

Row, row, row your boat
Gently down the stream,
Ha ha fooled ya all
I’m a submarine.

This rhyme is written in such a way that the children love to enact it. In this poem, a boy is happily rowing the boat gently down the stream. The poet has considered life as a dream. While he is rowing the boat down the book, if he catches the little fish, he will let it off from the hook. As the boy reaches the creek, he listens to the little mouse squeaking. When the little boy reaches the river if he gets wet, the poet tells him don’t forget to shiver.

When the boat passes through the shore, the poet tells the boy don’t forget to roar as he sees the lyin’ bear. As he reaches the water flow, the poet says that though rowing is fun but at the water flow it becomes hard. On reaching the lake, the poet guides the boy by saying don’t stand up and row the boat as that will be a big mistake! You may also like to read, Five Little Ducks.

As the boy reaches the water run, the poet tells the boy to row here and there as he is almost done. Sooner or later, the boy in the poem realizes that it was not the boat but a submarine. The boy has fooled all of us in the entire poem. Hahaha!