This has been adapted from one of the Grimm fairy tale stories for kids. Once upon a time, there lived a farmer. The farmer and his wife had seven strong and healthy sons. Unfortunately, they had no daughter.

Finally one day, the couple had a daughter. The family was happy to have her. But she remained sick and weak. Also, read One Eye, Two Eyes, Three Eyes. 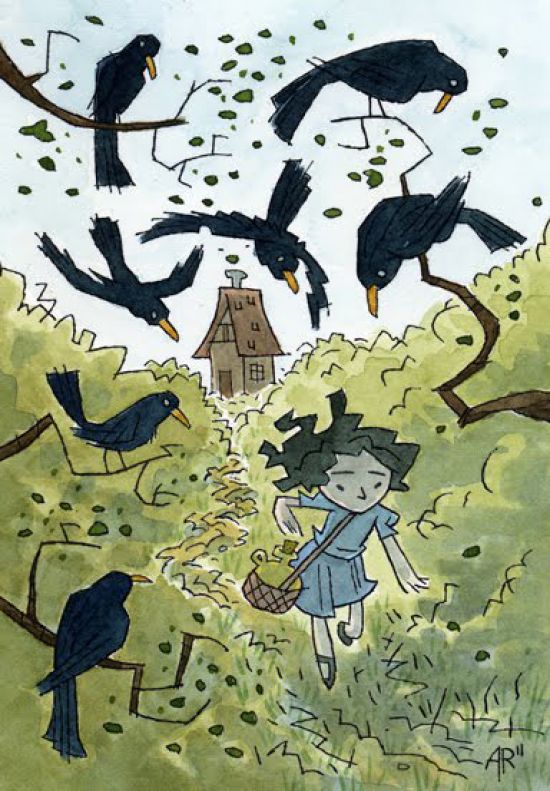 Image Source @ blogspot.in. One day, the father asked his sons to go out and fetch some water. The sons were instructed to go to the well with healing water. So, the seven brothers set out. Soon they found the well. But before they could bring the jug back home, it tumbled inside. The poor boys had no idea what to do anymore. They tried to retrieve the jug but all was in vain.

After a long time passed, the father became angry. “These boys must have run off someplace to play. I’ll teach them a lesson today,” the father thought and he cursed the seven of them, turning them into ravens.

The poor boys could not return home after that. Soon the girl grew up, beautiful and healthy. The farmer and his wife had never told the girl about her brothers. Even though they were sad for their sons’ loss, they comforted themselves with their daughter. The three of them lived happily together. You may also like to read, Toads And Diamonds.

But soon, the girl started hearing of her brothers from the neighbors. She also heard of their mysterious disappearance. The neighbors also revealed that her father had cursed her brothers. After hearing this, she confronted her parents, who told her that it was true. So, she decided to go save her brothers.

One night, she left with only a ring as a keepsake, a pitcher of water, some bread and a little chair, in case she got tired. She was determined to save her brothers. As the girl was traveling, she came to the sun. The sun was too hot for her. So, she left. Next, she found the moon. But the moon proved to be far too cold. Next, she came to the stars. The stars were kind enough to let her stay.

She soon found it, but when she looked for her drumstick, she could not find it! She looked around hastily, frantically searching for it. A little dwarf observed the little girl. “What are you looking for?” he asked her politely. She told him she had to see her brothers, the ravens. Also, read The Mother Holle.

Now, the dwarf used to work for them. So, he told her to wait inside, as the lord ravens weren’t home. While the girl waited, the dwarf set the table for the ravens. When the table was set, the dwarf went away. The poor girl had been hungry for a while. And she couldn’t stop herself from devouring everything on the table. She ate everything!

Soon, the girl heard a loud flapping sound. Away she ran to hide. “The lords are back” the dwarf announced. When the ravens sat at the table, they observed that someone had eaten their food. “Who ate our food?” the ravens questioned the dwarf.

The raven inspected the plates and the little glasses. It was then when the seventh raven found a ring. The girl had dropped the ring while she had been eating. “Oh!” he exclaimed. “It is our sister! She is here!” the seventh raven exclaimed. After all, he had recognized the ring. “She can turn us into humans again” they exclaimed.

When the girl heard this, she came out of hiding to meet them. The moment the ravens looked at her, they turned into humans. They embraced each other. So finally, the seven sons returned home to live happily with their parents and younger sister. You may also like to read, The Three Feathers.

Here is a short visual depiction of one of the fairy tale stories for kids “The Seven Ravens”. See the video story below,