Shadow Of The Wolf

This is one of the best fable stories about animals for kids, “Shadow Of The Wolf“. Once upon a time, in a jungle lived a wolf. One evening, the wolf decided to leave his cave and go outside. The wolf was extremely hungry. He decided to go look for some game. After a hectic evening of hunting and running around, the wolf decided to return to his cave. He made his way back.

As he was returning to his cave, the sun had started to set. The setting sun cast shadows of everything everywhere. So, the setting sun also cast the wolf’s shadow as well. When the wolf saw his shadow, he paused to admire it. He was extremely happy with his dark figure on the ground. The sun had cast a long shadow of the wolf, making him look bigger and stronger. Also, read The Monkeys and the Bell. 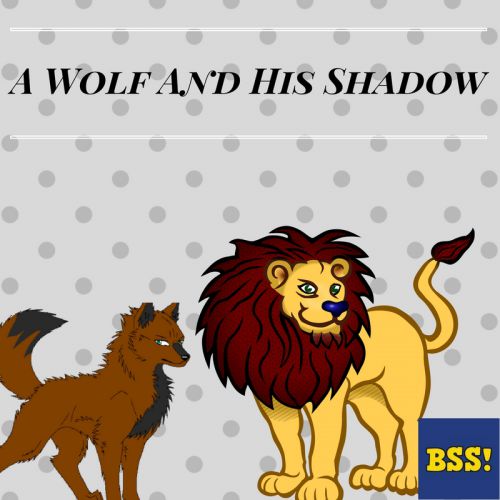 The wolf puffed out his chest and stood taller. The shadow looked hundred times bigger than him. The thought, “Look at that!” The foolish wolf was quite happy with himself now. “Wonderful!” he exclaimed admiring his shadow. “I am much taller than I imagined myself to be. Oh, look I am also much bigger than I expected to be!”

The wolf did not realize that the sun was playing tricks with his brain, and his shadow was not how he actually looked like. The wolf continued to look at his shadow, admired it. “Why now, I am much bigger than a lion!” said he. “Why should I run away from a lion when I am so big and strong?”

Just as the wolf finished talking go himself, he saw a lion. The lion was not far from where the wolf was standing. “I shall rule this jungle, ” the wolf decided. “I bet, if I go and growl at him he will tremble in fear and ask me to be the king.” The wolf in his foolishness made his way to the lion.

When he came near the lion, the wolf growled with all his might and spoke, “I will rule this jungle. I will become the king. ” The lion laughed at the wolf. Then, the lion roared. A loud roar that filled the poor wolf with fear. Then, before the wolf knew it, he became the lion’s meal. “The wolf was foolish,” the lion thought, “but he tasted good.” Also, read The Foolish Donkey.

Here is a visual depiction of, “Shadow Of The Wolf”. See the video story below,

Shadow Of The Wolf Story Video

Tagged with: fable stories about animals, fables for children, shadow of the wolf