This is the story through which the Tales Of The Arabian Nights started. A very long time ago, there was a large kingdom in Persia. The kingdom was so large that it was stretched all the way from Persia to China. It then crossed the borders of China into India where the holy Ganges flowed. For nearly four hundred years, this prosperous kingdom was ruled by a royal dynasty.

The kingdom reached its zenith under a particular kind-hearted king. Some years later, the queen gave birth to two sons. The princes were named as Shahriar and Shahzaman. Both the brothers loved each other very much. A few years later, the king died of old age. Soon, Shahriar, the elder son took up his father’s place and his throne. Shahzaman, the younger son became the king of great territory which was an area of the Persian Empire. Also, read Aladdin And The Magic Lamp. 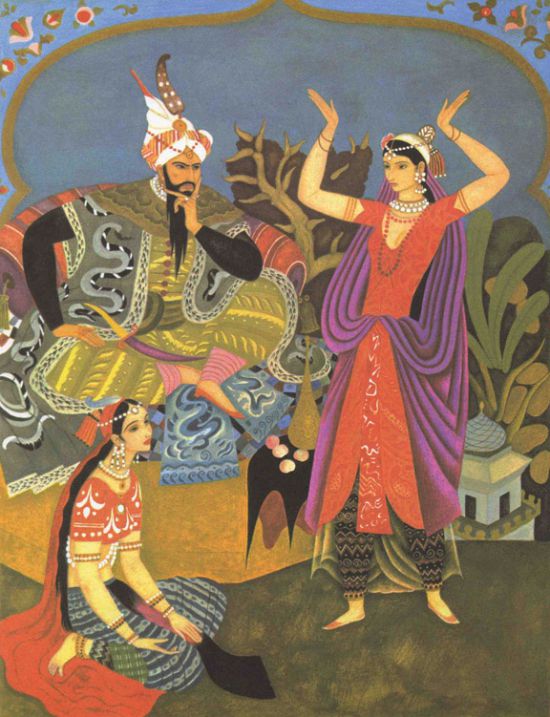 tales of the arabian nights

Image Source@ in.pinterest.com. Ultimately, Sultan Shahriar chose a beautiful woman to be his Sultana. He always used to gift her wife precious ornaments and jewels. He loved his Sultana more than his own life. But, as the time went by, he came to know that his wife had cheated him. She was an unfaithful woman. As he was a just king like his own father, he followed the just way. So he sentenced his wife to death as it was the custom of their kingdom. He ordered his Wazir to carry out this cruel task.For many days after that, the Sultan mourned of his wife. Then, in his anger, he decided that all women of the world are disloyal. To avenge himself, he started a cruel practice.

For many days, the Sultan mourned of his wife as he loved her a lot. One day, he concluded that all the women of the world were unfaithful. He started to see Sultana in every woman. Soon, he started a cruel practice of wedding a new girl and put her to death the next morning. Each time, the Wazir was appointed for this task and he had to obey the Sultan’s order with a heavy heart. All the citizens of the Sultan’s kingdom were angry and upset by his cruel practice.

One day, the Wazir’s elder daughter Sheherazade could not hold this. She said to her father, “Father, the Sultan’s cruel ritual is not liked by anyone. I think I can put an end to it.” The Wazir replied, “Daughter, that would be wonderful! All of the women and even the people of the city will be ever grateful to you. But how will you do this?” “By marrying the Sultan.” Sheherazade declared. The Wazir was shocked. Then tears welled up in his eyes. “Dear daughter, you know what fate awaits you the morning after the wedding. I can’t kill my daughter with my own hands.” Also, read The Adventures Of Sinbad.

Wazir started to cry as he loved her daughter. “Dear daughter, you know what fate awaits you the morning after the wedding. I can’t kill my daughter with my own hands,” he cried. But Sheherazade insisted her father. The Wazir went to the Sultan and told him that his daughter wished to be his wife. The Sultan was surprised but agreed to the marriage because he knew Sheherazade was a very beautiful girl.

The next morning, the Sultan married Sheherazade in the grand fanfare. Sheherazade asked her father to let her younger sister, Dinarzade accompany her to the palace as a gift of her marriage. That night, Sheherazade came to Dinarzade and said, ” I’ll ask the Sultan to let you stay with me tonight. Wake me up before the dawn and ask me to tell you a story. Then, my actual plan will start.” “But how can a story save your life?” asked Dinarzade. “Just wait and watch,” said Sheherazade with a smile.When the Sultan came, Sheherazade said, “Your Majesty! tonight is the last night of my life. I request you to let my dear sister Dinarzade, sleep with me.”

When the Sultan came at night, Sheherazade requested to let her dear sister Dinarzade, sleep with her. The Sultan agreed. Early before dawn, Dinarzade woke up Sheherazade and said, “Dear sister, one last time will you tell me one of those fascinating stories you know?” “A story,” exclaimed the Sultan. “Yes, I know many stories. Please let me tell a story as my last wish.” the Sultan agreed again.

Sheherazade then started telling stories which went on for one thousand and one nights. They were so interesting that the Sultan could not kill his wife before learning what happened next. Thus, the clever Sheherazade began her story. You may also like to read, Ali Baba And The Forty Thieves.