This is one of the awesome quick bedtime stories for kids. Long, long ago, there lived a pretty girl in a village called Bongseon. She was eleven years old. She had a talent of playing the geomungo, a Korean instrument. When people got to know about her, they came to hear Bongseon. But the little girl was so shy that she could not play in front of the villagers.One day, the king called Bongseon to the palace so he could hear her play.

One day, the King called Bongseon to his palace as he heard so much about her from his minister. So she was called in the palace. “Will you play for me?” the King asked the little girl. Shy Bongseon had no option but to play geomungo.  carefully played the geomungo for the king. Also, read The Little Girl And The Tooth Fairy. 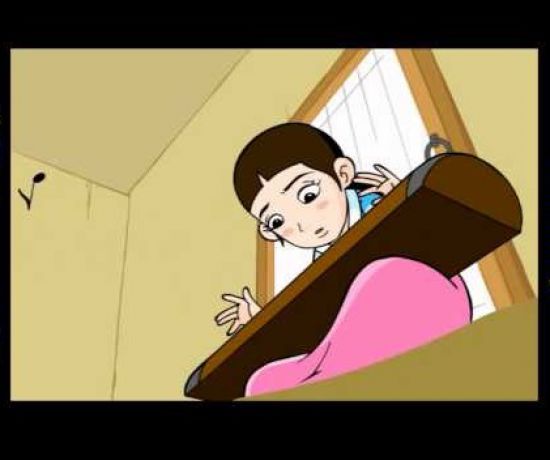 Image Source–> www.musicas.cc. As she began to play the geomungo for the king, she became very nervous. She was so nervous that she made many mistakes. “It was a false rumor. You played terribly bad. Get out of here,” the King shouted in anger. The King was so angry that he told his soldiers to kick her out.Since then, Bongseon became ill and lay in bed.

Since then, Bongseon became ill and lay in bed. She did not leave to play Geomungo because she really loved playing it. One day, while she was playing the music, she heard some noise. “The king is coming. The king is coming,” the villagers announced with great excitement.

Soon, the king came to visit the village. As the King was passed by Bongseon’s house, he heard some great music. She got up and gave all her strength to play the geomungo. The sound was so beautiful. The king stopped at Bongseon’s house to hear the music.

The king felt pity for Bongseon when he saw her condition. She was so weak that her fingers began to bleed while she was playing. He wrapped her fingers with the band-aid and praised her. But, Bongseon had gotten so weak that she died a few days later.

Here is a visual depiction of one of the great quick bedtime stories, “The Shy Touch-Me-Not Story”. See the video story below,