This is Sinbad The Fifth Voyage Story for kids. Once upon a time, in Baghdad lived Sinbad the Sailor. He happened to meet Sinbad the porter. Upon meeting him Sinbad the sailor began to narrate his stories one day at a time.

On the fifth day, after everyone was well fed he began narrating again. “As all the other journeys had been, my fourth journey had been profitable too. But once I was back in the comforts of my home, I began missing the sea again. Also, read Sinbad’s Second Voyage. 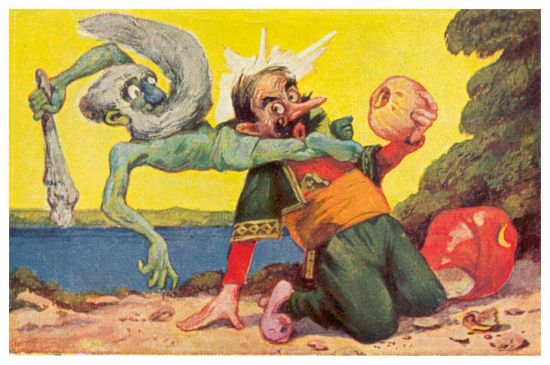 Once again I left my home and found a ship. This time I bought a ship and looked for a crew with a captain. Before we set out, my journey was already destined to be profitable. All the merchandise was loaded and set sail. We went from one port to another, and the business was profitable as usual.

Everything was well until we reached a floating island. Now, I had no interest in this island so I did not leave the ship. But the other merchants were curious and left to inspect floating island. The moment they touched the sand, they realised it was more like an eggshell. They began throwing stones at the island until it cracked.

A huge chick came out of the egg shell, and the merchants and the crew roasted it. The chick made a delicious meal. Then someone among us realized it was roque, a monstrously huge bird. Now that we had eaten its baby, it was sure to find us and take its revenge. You may also like to read, Sinbad’s Third Voyage.

Quickly everyone boarded the ship and we sailed away. We hadn’t gone far when the shadow of the giant bird fell on us. The bird was carrying huge boulders in its talons. It dropped the first one on us, but the ship didn’t sink until the second boulder dropped.

As the ship sunk, I managed to swim ashore. Thanks to Allah, I found myself alive. The waves seemed to have washed me ashore to some heavenly island. That night I slept peacefully among the flowers beside a stream. When I woke up the next morning, I saw an old man. I thought of helping him, believing that if I helped him I’d go to heaven.

So, I picked the old man up and started to wade through the stream. Midway, I felt the old man’s legs tighten around my neck. I lost consciousness for a short while. Coming back to my senses I realized that the old man was kicking my sides and wanted me to take him to the trees. There, he picked out a few fruits. I carried the burden of the old man for some days. Even at night, he used to sleep with his legs knotted around my neck. I started to beg for my death. But Allah had other plans for me.

One day, in a part of the island, I noticed grapes and hard shelled fruits. I made wine out of the grapes. Then one day when I was extremely happy after drinking it, the old man asked for it too. I gave it to him, then he kept asking for more. Soon he fell asleep.

And the moment he fell asleep, his grip loosened. I took that chance to run away. At the shore, I found a ship and boarded it. There I learnt that the old man was Shaykh al-Bahir, who had never let any man go after knotting his legs around their necks. I was lucky! You may also like to read, Sinbad’s Fourth Voyage.

The captain let me board freely till the next island. The capital of which was called the City of the Apes. The reason for such a name was because even the high city walls didn’t keep the apes out. They used to pelt the people of the city with coconuts. As a result, people lived in boats and not in their homes. There, I fell in with some business minded men, who made a profit out this situation as well. These men threw stones and picked up the coconuts thrown by the apes. Those coconuts were sold for a good profit at a market.

So, that is how I came to make yet another fortune on my fifth journey. Soon, I grew tired of it and returned home,” concluded Sinbad the sailor. As usual Sinbad the porter was invited yet again. He also received a hundred dinars.