Sinbad the sailor began his story once again, “I was rich again. But once again I got tired of the easy life here. I wanted to be on the sea again. So yet again I left my house and went to Basra to find a ship. Soon I found a ship of merchants and sailed with them. 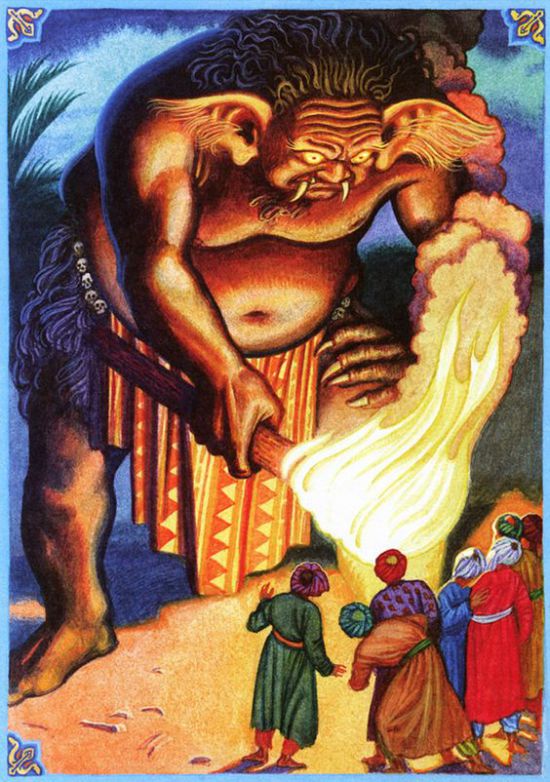 Initial days were good. We sailed from port to port and traded the materials we had brought. But on the fourteenth day, a strong wind blew our ship to a coastline. After the wind had died down, the captain gathered all the men and cautioned us to be careful because he thought we were on dangerous lands.

And he was right. Soon the inhabitants of the island surrounded us with spears and deadly looks. For the ship had anchored on the mountain of Apes. The men were dwarfs, but many in number. They jumped from tree-tops with spears in their hands. And our crew feared, that if we killed one of them, all of those men would kill us in no time.

Those people cut all the cables of our ship and took everything with them. With nothing left, we found food to eat. After satisfying our hunger, we moved inwards. We decided to survey the land. Soon we found a fortress on top of a mountain. I thought to tell others that we should climb the fortress and be at mercy of whoever resided there. With no other options, others agreed. You may also like to read, Sinbad’s First Voyage.

We inspected the place but found no one there. But there was smoke and a lingering smell of meat. So we decided to take a nap first. No sooner had we fallen asleep, we were waken up by a minor earthquake. A loud noise shook the ground. Then, we saw a monster coming our way.

He was built like a human but had the lips of a camel, tusks like a swine and a huge mouth. We were frightened at the sight of the monster. Upon looking at us, the monster first picked me up but he set me down. Then he looked around and picked up the master of the ship, the fattest person among us. The monster then broke his neck and roasted him. After eating him, the monster fell asleep.

Next morning when the monster was away, we tried to find a place to hide but find none. At night the monster returned and ate another one us. The next day, we decided to do something about the monster. I suggested that we should make rafts and try to kill the monster and if we succeed we can leave the island on it.

That night, after the monster ate and slept, we lower the raft above the monster and with two heated iron spits we blinded the monster. Now, the blinded monster could not see or eat us. In the morning he brought back a female of his kind. We quickly got on the raft and tried to sail away. But the female threw huge boulders at us, everyone died, except for two of my companions and me. Also, read Sinbad’s Second Voyage.

Later we came to an island, after looking around, we decided to sleep. But in the night, a giant serpent appeared and ate one my companions. The next night, it ate the other one. I was the only one left. So, I tied rocks onto myself, in that manner, the serpent could not find me. I was saved. The next day a merchant ship was passing by, I got their attention and they rescued me.

While we were sailing, the captain gave me some goods that were some other merchants. The captain said that the merchant was lost or probably dead, so I could sell them and keep a portion of the money. But after inspection, I found that the things were actually mine!

Somehow I manage to convince the captain that those things were actually mine. I sold the goods and made good money. And soon I returned home. I made a large profit, so donated some of my gains to widows and orphans. Then I became busy with enjoying and forgot about my hardships at the sea,” Sinbad the sailor finished.

He then gave Sinbad the porter a hundred dinars and invited him again.

Tagged with: sinbad the sailor story