This is Sinbad The Sailor story in English for children. Once upon a time, in Bagdad, Sinbad the Sailor began telling the story of his voyages to Sinbad the Hammal. On the second day of telling, he made sure his guests were well fed first. More about Sinbad The Sailor.

Then he began, “After I returned, I had regained my wealth. I had all the luxuries I had had before going on my voyage. But after a point, I was not happy with my life. I missed being on the sea, the salty sea breeze. So, I decided to go on another voyage. 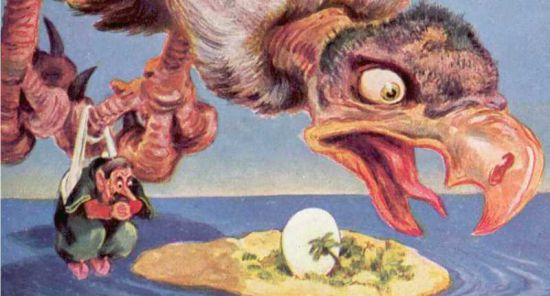 sinbad the sailor story in english

Image Source@ gajabkhabar.com. One day I left my home and went to the port. There I found a ship and booked my place with the captain of the ship. We set sail the next day. Soon, we came to a beautiful island. The island was peaceful and there was no sign of other humans.

There I wandered around at the shore to find a spot to enjoy the food I had brought. After eating I fell asleep. But when I woke up, I found that the ship had sailed without me. I waited for my ship to come back, but she never did. I thought my life of luxury in Baghdad was lost now.

Suddenly the idea of surveying the island struck me. I was sure that I would find something. I climbed up a tall tree and looked as far as I could. But I did not see any smoke but I did see a strange looking dome. At once, I climbed down the tree and ran to look at it closely. You may also like to read, Sinbad’s First Voyage.

When I reached the strange dome, I ran around it. I hoped to find a door, but I found none. More than a dome, it looked like an eggshell. I gave up and sat beside it. Towards the evening, the sky started to become dark. I thought it was a storm, but then I realised it was a giant bird. It descended on the egg. I decided to tie myself to the bird’s claw because I was willing to do anything to get away from that island.

But that decision proved to be one of the worst decisions. For, when the bird flew the next day, it took to a place where there was only lava and volcanoes. There were no trees. I untied myself huge wall, a wall no man could scale. On either side of the wall, there were pits full of serpents that could eat an elephant in one gulp. I was able to successfully stay out the serpents’ mouths. I found a cave and hid there.

But soon enough I found out that a serpent was brooding on her eggs on the other side of the same cave. I was extremely frightened. And I did not sleep that night. I ran out of the cave the moment sun rose. Somehow, wandered down to the valley. And suddenly, I found huge pieces of meat falling from the sky. At first, I thought it was the bird, then I remembered a tale where merchants would throw pieces of meat into a valley, fabled to be the richest valley. The merchants did so because they thought the diamonds would stick to them.

Then they would wait for another bird to pick it up and take it to their nest And the merchants would take the meat from the bird’s nest. I knew exactly what I had to do. I filled my pockets with diamonds and then I tied myself to a piece of meat. Then I lay and waited for a bird. A bird picked me up and took me to its nest. There I waited for other merchants to come and scare the bird away. When the merchants came, they were surprised to see me.

I told them that I had enough riches to satisfy all of us and I was willing to share them with the man who threw the meat. Then we climbed down the tree. We came to a clearing, I told them of my adventures. Then we safely made our way to the ship and from there I returned to Baghdad. I promised myself that I would never sail on the sea again. If only I had kept my promise.” Also, read The Adventures Of Sinbad.

Sinbad the Sailor gave Sinbad the Hammal a hundred gold pieces and invited him to come again the next day for another story.