After feeding his guests he began retelling his fourth journey, “The gains I made from the third journey weren’t able to keep me from the sea for long. So, I went to Basra again and boarded a ship. We sailed from port to port, our business was profitable. 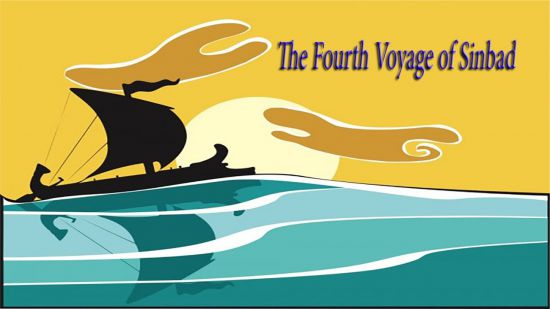 But then, one day, we were caught in a hurricane. The captain could not save the ship and it reduced to tatters. Somehow we drifted ashore on a strange land. There, we found a fine house. The gate was opened and many men came out, these men did not speak our language.

They gave us a warm welcome and took us inside to see the king. We believed that we had been fortunate. The king was even warmer. He asked us to sit down and we were served good food. We chomped and ate like animals because it had been long since we had some food and our kind hosts didn’t mind. Also, read Sindbad The Sailor Story – Second Voyage.

I, on the other hand, had no intention of behaving like them. Sitting quietly, I understood that we had fallen into the hands of cannibals. They were fattening us up to eat us later. After the meal, we were kept like cattle. Most men lost their hopes of escape but I didn’t.

One day when we were let out for grazing, I saw that the old shepherd who was in charge of us wouldn’t mind if I escaped. So I did. Quickly I found a road and walked and walked. Soon I came to a city. I quickly found a band of travelers and joined them. They asked me my name and where I was from. I truthfully answered and told them that I had just escaped the cannibal farm. They marveled at my escape and promised to introduce me to their king.

I explained the idea of saddles to the king. The king was amazed and asked me to make one. I quickly found a clever carpenter and had him make the frame. The king liked the saddle and I set up a business. All kinds of people ordered the product. Then one day the king told me that I had greatly helped him and his people. As a reward, he had found a wife for me. Also, read Sindbad The Sailor Story – Third Voyage.

I watched the women dress his wife in the finest clothes. I saw them take the man and his wife on their last journey together. When all was done, I asked a person if the same was applicable to me. They assured me that it was.

I came back and lived happily. But soon my wife took to an illness and passed away. When the doctor announced her death, the soldiers came and took me. They buried us together, without listening to my protests as custom. I was given few pieces of bread and a jug of water. I remained between the bodies for don’t know how long.

Among the dead and decaying bodies, I found old treasure and jewels. I instantly collected them. But what use was it in that dark place I wondered. Then, a few days later, I heard scurrying sounds. A dog, perhaps a fox, but I didn’t care. Because I was fixated on the thought that if it could get in, I could get out. I followed the sounds with the fortune I had collected.

Soon, the hole opened up on a seashore. And it was just my luck that I found a ship and the ship’s captain welcomed me warmly. I had become home bound once again. And I swore never to venture out on the oceans again, the sailor finished. He gave the porter a hundred dinars and invited him again.

Tagged with: sindbad the sailor story