This is the sixth voyage of Sindbad The Sailor Story. Once upon a time, in Baghdad Sinbad, the porter came to know Sindbad the sailor. On the sixth evening, after all the guests were fed, Sindbad the sailor began his tale again. Also, read Sinbad’s Third Voyage.

“After coming back from the sea, I soon forgot about the waves. But all the riches on this land couldn’t stop me from missing it. One day, I set out to the port again. Once again, I boarded a ship and went out. We went about sailing from one island to the other. Luckily, the business was going well, and we were making a fortune. 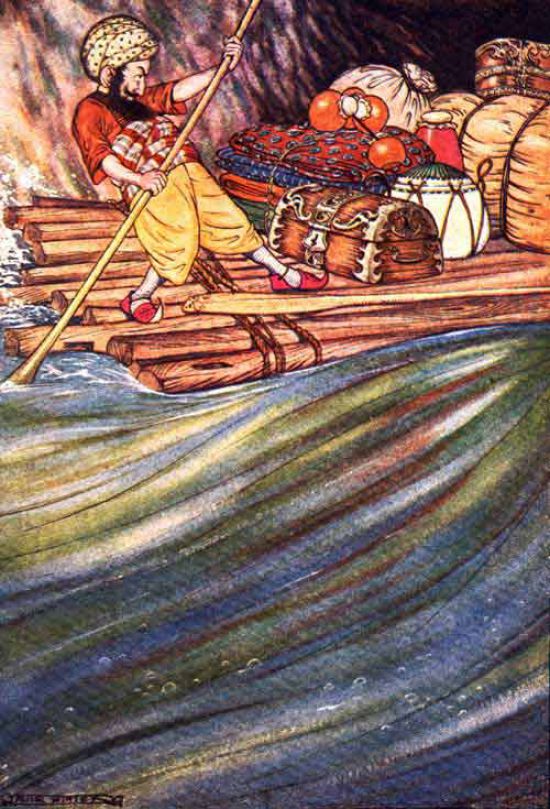 Then one day, the captain came to me and fell on his knees. He was crying that his children would become orphans. When I asked, I was told that he had strayed from the known path and he didn’t where we were going. Now that was a terrifying news. Soon after our ship’s hull crashed into many rocks and we were shipwrecked.

Many of us drowned that day. Some other men and I were the only few that survived. I quickly climbed over a rock. From there I saw that the island where we had swum to, was overflowing with jewels. Even the streams had precious rocks in them. The beaches had Ambergris, a kind of stone that formed from the floating gold in the bellies of sea monsters. They spewed it out, they were extremely valuable. You may also like to read, Sinbad’s Fourth Voyage.

All the other merchants went crazy after seeing such things. They instantly filled their pockets and were sure to return home and be rich. But as luck would have it, there was not a grain of food to be found. We found only small herbs. Soon, many men started dying, until I was the only one left. Then, one day as I was waiting for my end to come, Allah sent me a thought. He implored me to venture into the island.

As I was exploring, I found a river. I made a raft out of logs and loaded it with all the precious stones. Then, I set out on the river, trusting it to take me somewhere. Soon, I came to caves, I ducked down so that I don’t hit my head. It was so dark, that I could not see a thing. Just when I was thinking I would never see daylight again, the river brought me out of the darkness. Here some men had seen me and offered me a rope to hold on to. They hauled me up and I was saved.

Soon I found that they didn’t speak the same language, but they were good people. They took me and my precious stones to the king. I realized it was the King of Sri Lanka, to him I offered the entire store of the stones. Then, I told him my story. When I was asked about my country I told him everything. He was greatly pleased and praised the caliph.

He told me that he wished that I would get back to my country safe and sound. Also, he asked me to take gifts. I lived a grand life at the palace, until one day I heard that a ship was setting out to Basrah. I bid the king farewell. He paid for my fare and loaded the ship with cargo. He also gave a letter to be given to the caliph. It was written on fine deerskin.

The Sri Lankan king sent many presents. Among them were precious stones, pearls, a snake’s skin that had swallowed an elephant whole and whoever sat on the skin would never get sick. When I returned home, I went to see the caliph right away. The caliph looked at the letter and asked me if it was true and I replied that it was. He didn’t let me leave until he had bestowed me with great gifts and immense wealth. Also, read Sinbad’s Fifth Voyage.

I distributed those gifts and wealth among my friends and family. Then I donated some to the poor and needy. Once again I returned to my old life of comforts,” finished Sindbad the sailor. This time Sindbad the sailor was given a gold coin and asked to come the next morning for another tale.