This is one of the amazing Brothers Grimm tales for kids. Once upon a time, in a faraway kingdom, the people lived in peace and harmony. But in the recent times, a wild boar had been the cause of the people’s discomfort.

The wild boar had been running loose. In a short span of time the boar had killed many workers in the fields and ruined the crops. Unfortunately, the people and the workers did not have enough strength to fight it by themselves. The king too had been worried. He offered many rewards in exchange for the wild boar’s corpse, but nothing seemed to work against the boar. So, in the end, the king announced that whoever brought the boar dead or alive would be married to the king’s only daughter. You may also like to read, Toads And Diamonds. 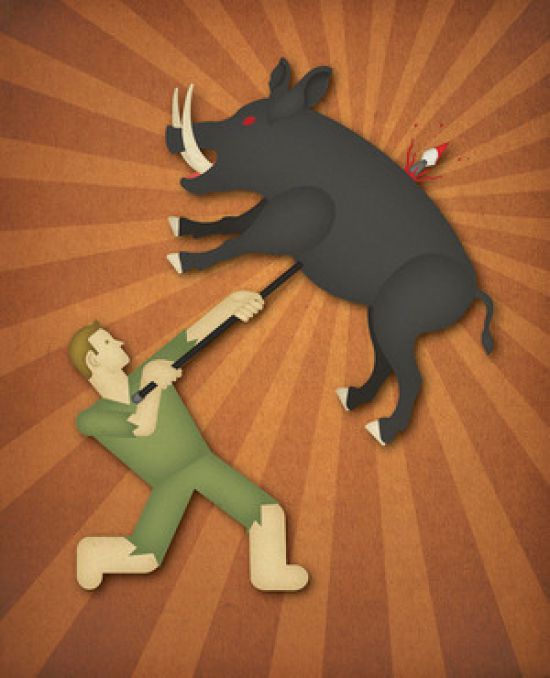 Image Source @ youngjjnlim.com. Now,  in the kingdom there lived two brothers, who were strong and willing to kill the boar. So, they set out to kill the boar together. These two were nothing alike. The eldest had always loved his pride and fame, so he wanted to marry the princess to called a hero. But the youngest had no such ambitions. He only wanted to kill the boar so that it doesn’t do any more damage.Upon the king’s suggestion, both of them entered the forest from opposite ends.

Now, the elder one was in it for only fame and not the work, so he agreed. The brothers entered the forest. The youngest set to setting different traps for the boar and worked on his strategy. Whereas, the eldest soon found an inn and spent his days drinking and being merry.

The younger brother had not gone too far when he met a little elf. Now, this elf had a gift for the younger brother. After handling a black spear to the brother, the elf said, “Because your heart is innocent and pure, I will give this to you. With this spear, you’ll be able to find the boar and kill it. The boar will not be able to hurt you.” The youngest brother thanked the elf for the present kept moving forward. Soon after, the youngest brother encountered the wild boar. He saw the boar charging towards him at top speed, and saw it ready itself to jump at him. The youngest brother timed his attack and hit the boar precisely at the moment the boar jumped. And just like that, the wild boar was no more.

The older brother returned to the kingdom and was named a hero. He married the princess later and lived a merry life of a hero. But one day, years later, a shepherd happened to pass by the bridge. There he found a bone. “What a pretty bone,” he thought, “it’ll make a fine mouthpiece for my horn.” So, he pocketed the bone and later used it on his horn. The moment he did that, the music he played suddenly became more melodious. The bone began to sing his tale, but not many understood it. One day, the praise of this shepherd reached the king and the shepherd was asked to play in the king’s court.

There, the bone sang about what had happened. The song was about a man killing a boar and being killed for the very same reason. It also talked about the place where the rest of his bones were buried. At first, the king was surprised to hear such a song but soon the king made sense out of the song.

The king then went to inspect the spot talked about in the song. And to his surprise, he found the entire skeleton buried under the bridge. Just as no dark deed can be concealed, the older brother’s deeds to come to be known. The older brother could not deny what he had done. As a punishment, the older brother paid for it with his life and the younger brother was named the hero. His bones were buried in the churchyard. You may also like to read, The Star Money.

Here is a visual depiction of one of the brothers Grimm tales, “The Singing Bone”. See the video story below,