Sir Cleges And The Christmas Cherries

This is one of the very short inspirational Christmas stories for children. In the time when England was ruled by King Uther Pendragon, father of the famous King Arthur lived a brave knight. His name was Sir Cleges. He was big and strong. Sir Cleges was noble, courageous and extremely generous. He owned many lands and had a huge fortune.

Unfortunately, as time passed Sir Cleges lost all his money due to his generosity. To the poor, Sir Cleges gave away as much gold as he could, forgave the rents for his tenants who had a hard time and he lent money to people without expecting any repayment. He had a beautiful wife, Dame Clarys. She was as kind and generous as her husband. Also, read A Christmas Carol Summary. 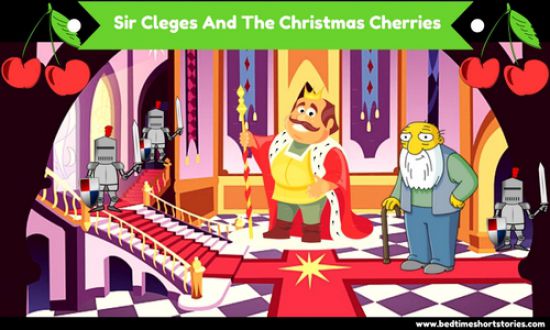 Every year on Christmas Eve, Sir Cleges and his wife hosted a grand feast at their house. Many people attended this feast and no one would leave empty-handed. Over the years, his wealth dwindled but he never gave up on his feasts and gifts. At last, he mortgaged all his lands when his gold and silver ran out. He knew, in the end, God would make things right for him.

In the end, he was only left with a small estate that held little value. His wife and his two children lived humbly without any luxuries. This Christmas, he had no money for his feasts and gifts. As he walked through his house, Sir Cleges felt miserable. He could hear the music and the happy laughs. “Oh Jesus in Heaven, I thank you with all my heart” he cried out suddenly, “for the joy I felt during this time for years when I hosted the feasts to rich and poor in your name. Those who dined at my table were short of nothing.”

On Christmas day, Sir Cleges walked outside his house. He knew that even though his situation was bad, there were many others who were suffering as well. He sat down under his favorite cherry tree and wondered if there was a way to help people even in his current state. As he sat under the tree, he heard the rustling of the leaves.

He looked up and saw that the cherry tree was in full bloom, even on this cold winter day. He became very happy and picked out a few cherries and took some home.

Sir Cleges agreed with his wife’s plan. He went outside and picked out the very best cherries from the tree and decided to go to Castle Cardiff. Halfway to the Castle, he realized he was not dressed properly. His clothes were dirty and had holes in them. He was disappointed, he thought the king may not receive an ill-dressed man. “I shall go even if I am not dressed like a knight. After all, I still am one.” You may also like to read, The Little Christmas Tree.

He was stopped at the castle gate, “Who are you? What business do you have?” asked the guard. “Good day, Sir,” replied Sir Cleges humbly, “I am a knight of his Majesty’s realm. I am here to offer this basket of cherries to the king.”

The guard demanded a payment if Sir Cleges wanted to enter the castle. Sir Cleges was poor, he tried to convince the guard, but the guard would not listen. Finally, the guard said to Sir Cleges, “Whatever reward you receive from the king, I shall have one-third of it.”

After an agreement, Sir Cleges was allowed to pass. Shortly after, he has stopped again and another guard demanded one-third of the reward. To this, Sir Cleges agreed and was finally allowed into the king’s hall. Also, read The Christmas Santa Almost Missed.

After the dinner was done, the king asked what present did Sir Cleges want. “I have only one wish, your highness,” said the poor knight. “If it pleases your highness, I shall like the permission to give twelve strokes to any person of my liking with my stick.” The king was surprised at the request but granted it the same.

When the third guard saw Sir Cleges come out of the king’s hall he demanded his promised share. Sir Cleges immediately hit him with his stick four times in a row. This sent the guard running away. The same thing happened with the second guard and the third guard as well.

When Sir Cleges was about to leave the castle, a guard came running to him. “The king has summoned you to his hall,” Sir Cleges was told. Finally, the kind had remembered Cleges. He asked why was he in such a poor state and expressed his desire to know more about Cleges’ request. You may also like to read, How Santa Got His Job.

Sir Cleges then, narrated the incidents. After Sir Cleges was done retelling the tale, King Pendragon laughed and said, “You have earned another reward, clever Sir Cleges. You shall have new lands and the control of this castle. But you must promise to be wise with your money.”

And so, Sir Cleges made his promise to his king and returned home a wealthy and happy man.

Here is a short visual depiction of one of the very short inspirational christmas stories “Sir Cleges And The Christmas Cherries”. See the video story below,