This is the Snow White Short Story. Once upon a time, there was a big and beautiful kingdom in which lived a king and a queen. They had a gorgeous daughter with black hair and fair skin and her name was Snow White.

Over the years, the princess grew up becoming more and more beautiful and kind. But, sadly her mother died and went to heaven. After a while, the king had married the new queen, who turned out to be an evil witch. Also, read Beauty And The Beast. 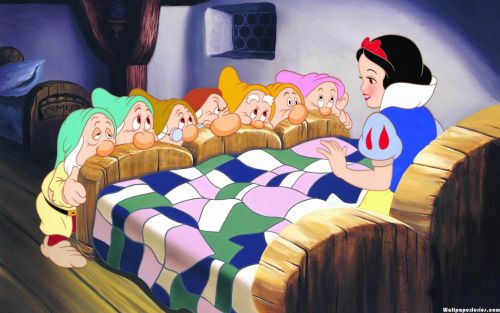 One day, the witch asked her magic mirror a question. Mirror! Mirror! on the wall who is the most beautiful woman in this kingdom? And the mirror said, “Snow White” it is. The witch queen got very angry on hearing this. She ordered a soldier to take her away from the kingdom and kill her. Don’t forget to check out more Snow White Videos & Fun Facts.

The soldier obeyed the queen. He took the princess to the forest but could not kill her because she was a very nice person. Then he said, “Go away Snow White. I will spare your life. But don’t ever come back because the queen witch wants to kill you. Go away now!”

She ran and ran with all her strength through the middle of the forest. She was very tired. Then far away she saw a tiny house and decided to get inside. When she came in, she saw that everything is quite small and as she was tired she laid down on the little bed and fell asleep.

Soon after, seven dwarfs came into their house. When they saw Snow White, they got surprised and said, “What is this girl doing here?” After some time, she became friends with the seven dwarfs. She cooked food and danced with them. Also see, Amazing Snow White Gallery.

The Witch Casts A Spell

But one day the queen witch found out that the princess was still alive. So she took a secret potion and turned herself into an old lady to be able to go to the dwarf’s house without being noticed. The witch knocked on the little house door and when Snow White opened the door, she saw an old lady who was the witch in disguise.

The witch said, “Beautiful child! take this delicious apple. I am sure that you have not tried anything like this before.” She took the apple and bit it without knowing the evil witch has poisoned the apple. She fell on the floor after taking the bite and never woke up. The little dwarfs got very sad and decided to place her on the flower bed.

The Spell  Is Lifted

One day, a handsome prince came to the forest on a beautiful horse. When he saw Snow White, he was so mesmerized by her beauty that he fell in love with her and kissed her hand. At that very moment, she woke up because the kiss broke the witch’s magic.

She was pleased to see the handsome prince in front of her and she also fell in love with him. The prince and Snow White lived happily ever after and the witch got so mad that she broke the mirror and never heard the mirror ever again. Also, read Rapunzel Story.

Here is a short visual depiction of one of the most famous short stories for kids – “Snow White Short Story“. See the video story below,