Snowball And His Forest Friends

This is one of the amazing animal stories for kids in english. One day, the forest God created an animal. It was called Snowball. Snowball was round, his fur was very white. He was a beautiful animal. All the animals liked him.

However, Snowball was mean. He was always very rude and mean to others. He was roaming in the forest. While he was roaming, he met Piggy. “Your nose is so funny! It is looking at the sky,” laughed Snowball. Piggy started crying. Also, read The Little Red Hen. 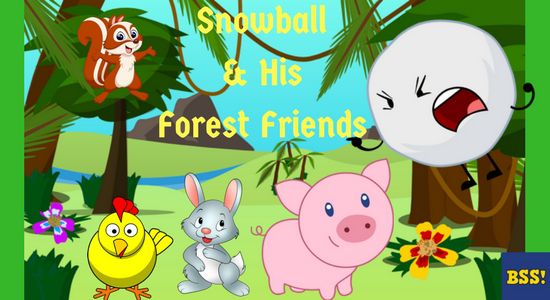 Further, on his way, he met squirrel. “Snowball, come play with me,” said squirrel. “No, you are too small!” laughed Snowball. The squirrel became very sad. Next, Snowball met deer. “You have twigs on your head,” cried Snowball. The deer too got upset.

Snowball kept walking and he was humming a song. Soon, he passed by a hen. The hen said, “Hello, Snowball! Let’s be friends!” “No, look at your ugly red hat,” laughed Snowball and he again made the fun of his forest pal. The hen was embarrassed. All the animals did not like Snowball anymore.

All the other animals came up together for a meeting and decided to ignore him. “He is so mean! Why he is so beautiful?It’s not fair,” said the animals. “I am not going to be his friend,” cried the Pig. You may also like to read, The Three Little Pigs Story.

The forest God called Snowball and said, “Snowball, stop being mean to others, otherwise your fur will fall out!” But Snowball didn’t care and he kept on teasing other animals. His fur started falling off. Soon, he had no fur. Snowball began to cry and said, “I won’t tease anyone! Please give me my fur.”

Seeing him sad, the forest God appeared. He said, “Go to the forest, make new friends. Only then, your fur would grow! If you cannot make friends, your body will grow.” Snowball went into the forest. He went to Piggy first but Piggy ignored him and immediately disappeared. Snowball’s body grew.

Snowball’s fur did not grow at all. His legs too disappeared. Now, his body was very long. The other animals laughed at Snowball, “You have no fur! You are so ugly,” they yelled. Snowball was ashamed of himself and he hid inside the cave. He was all alone. You may also like to read, The Lazy Squirrel.

“I was so mean,” he cried. But it was too late to realize his mistake. Time went by and Snowball forgot about his beauty.He slid across the cold ground. All the animals too, forgot about Snowball. He had a new name now. He is called Snake since that day.

Here is a short visual depiction of one of the animal stories for kids in english “Snowball And His Forest Friends”. See the video story below,