This is the short story of Sofia The First. It used to be just Sofia and her mom. But then, her mom married King Roland. Now, Sofia’s mom is the queen of Enchancia and Sofia is the princess. The trouble is, Sofia doesn’t really know anything about being a princess. She never had to do a royal wave, she is not sure when to curtsy, or even which fork to use at dinner! “I’ll never be as perfect a princess as my new step-sister Amber,” Sofia says.

“Just be yourself and you’ll be fine!” her mom says. Sofia is not sure that will work. “How can I be myself and be a princess at the same time?” she asks. King Roland, her new dad, tries to help. He gives Sofia a beautiful necklace called the Amulet of Avator. Her dad says, “It’s a welcome to the family gift and that lots of princesses before her have worn it!” Then he tells they’re having a royal ball in her honor.They have to dance the first waltz together. That’s another thing she doesn’t know how to do the dance. Read more about Princess Sofia.

“Maybe there will be a dance class in my new school, Royal Prep Academy,” Sofia says. The headmistresses are three fairies named Flora, Fauna, and Merryweather. They promise to teach her everything about being a princess. “Hooray! I do have a dance class!” Sofia says. Amber lends Sofia a new pair of shoes. “I think she’s starting to like me!” Sofia says to herself.

“Oh no! Amber tricked me,” Sofia says. The shoes are under a magic spell. The whole class laughs at Sofia. But even worse, Sofia still doesn’t know how to waltz and the ball is tonight. Then, Sofia remembers Cedric, the sorcerer at the castle. James, her step-brother says Cedric has all sorts of magic spells. Sofia asks Cedric to help. He writes down some magic words.  You may also like, Frozen Elsa Story.

He says if Sofia recites them at the ball, she’ll be able to waltz like a real princess. “All hail Princess Sofia!” says Baileywick as Sofia enters the ballroom. “Shall we dance?” the king asks. Sofia recites Cedric’s magic words, ”Somnibus Populis Cella!” But she doesn’t start to dance, instead, everyone at the ball falls asleep, even Cedric.

“Oh no! What have I done? Help!” Sofia cries. Suddenly, her amulet glows and Cinderella appears. “Your amulet brought me here. When a princess is in trouble, another will come to help,” she tells Sofia. “Can you reverse the spell, Cinderella?” Sofia asks. “No I can’t, but your new sister might be able to help,” says Cinderella. “But Amber’s mean so mean to me!” tells Sofia.

Princess Cinderella knows what it’s like to have mean step-sisters. “I wish I had given step-sisters a second chance. Perhaps that’s what Amber needs,” she says. Then, she disappears. Amber is still in her room. She never made it to the ball. Amber finally tells Sofia why she’s been acting so mean. “I was worried that everyone would like you more than me,” she says sadly. “No one could ever be as perfect a princess as you, Amber!” Sofia says.

Sofia tells Amber about Cedric’s magic spell. They searched his workshop and find a spell that will wake everyone up. Then they hurry to the ballroom. “Wait, I owe you a dance lesson!” Amber says. Now, Sofia knows they are true sisters and ever after friends. 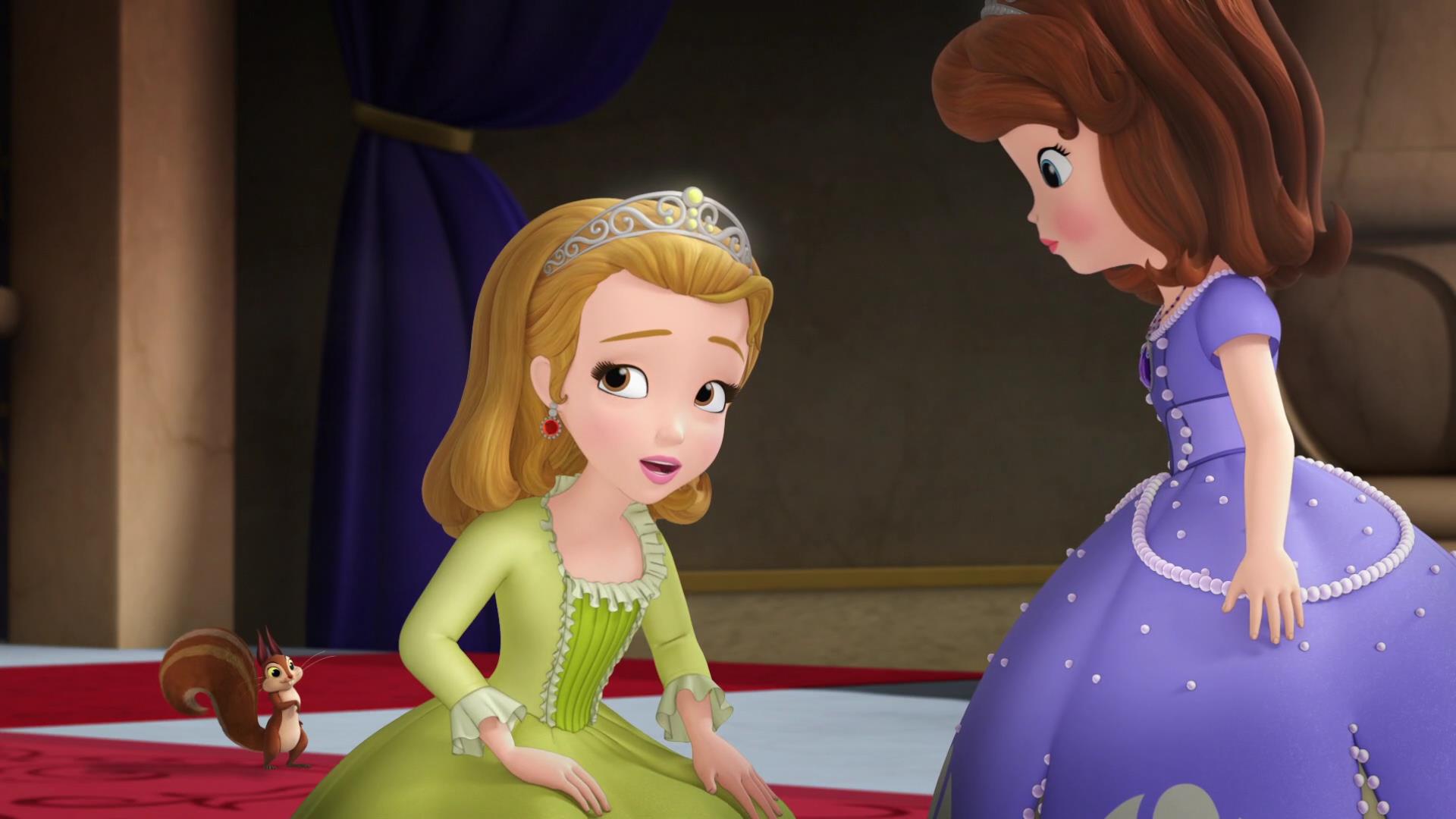 When Sofia gets to the ballroom, she says the magic words and everyone wake up. Then the king and Sofia begin to waltz. Sofia looks over at Amber and smiles. “I can’t believe how happy I’m! I think I’m going to fit into this royal family after all!” Sofia says to herself.

“Sofia, I’m so proud of you! You dance wonderfully!” her dad says. “Thank you, Your Majesty, I mean dad!” Sofia says. “You know Sofia, being a princess is about having a good heart, and you are going to make a great princess,” says her dad. “Dad, I’ve been wondering, why do they call you King Roland the Second? she asks. “Because my father also named Roland,” he tells her.

“Well, I guess that makes me Sofia The First!” And she is one princess who can’t wait to see what happens tomorrow and all the days happily ever after. Also read, Princess Tiana.

Here is a visual depiction of, “Sofia The First Story”. See the video story below,