This is the short story of Splat The Cat. It was early in the morning and Splat was wide awake. Today was his first day at Cat School and his tail wiggled wildly with worry. “If I’ll hide from the day, maybe it will go away,” he thought. But, it did not go away. “Time to get up!” said his mom. “Time to get dressed!” said his mom. 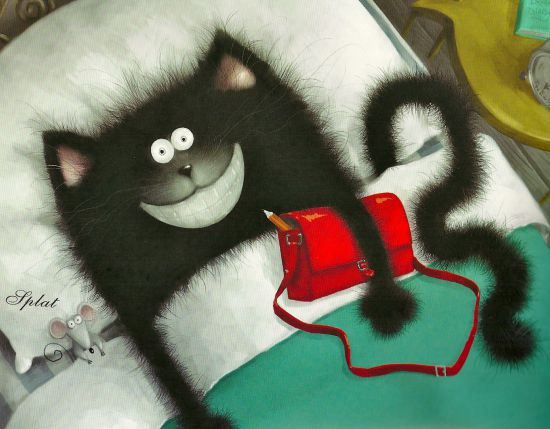 Image Source–>  www.wonderteach.wordpress.com. “Don’t forget your lunchbox,” said his mom. “I’ll need a friend today!” thought Splat. And he dropped his pet mouse, Seymour, into his lunchbox. “Time to go,” said his mom. “The front door won’t let me out, Mom. The gate won’t let go of my fingers, Mom. The lamppost won’t get out of my way, Mom!” cried Splat. “You can ride your bike if you like,” said his mom. So he did. But he did not say a single word.

“Welcome to Cat School!” said a big, round cat. “I’m Mrs. Wimpydimple, your teacher.” Spat’s Mom gave him a hug and said, “I’ll be back soon. You’ll be fine!”

You may also like to read, Belling The Cat.

Splat opened his lunchbox. “Mouse!” his classmates cried. The cats did what cats do. Seymour hid behind a glass bottle and when the cats saw his face through the glass, they screamed and ran away. Seymour did what all mice want to do. “Stop!” cried Splat. “SPLAT!” They didn’t stop.

“Enough!” Mrs. Wimpydimple said and it ended. “It’s milk time!” “HURRAY!” shouted the class. But the door to the milk cupboard was stuck. “No milk today!” announced Mrs. Wimpydimple. Just then, Splat whispered into Seymour’s ear. Seymour nodded and then. A moment later, the door swung open. “Yum!” said the little cats.

Also read, The Fox And The Cat.

It was early the next morning and Splat was wide awake. Today was his second day at Cat School and his tail wiggled wildly. But this time, with lots and lots of excitement.