This is Stickman Story for kids. Stick Man lived in a family tree with the Stick Lady Love. They had three stick children. You may also like to read, Harry- The Happy Snowman.

One day, he woke up early and went for a jog. As he was jogging, a dog saw him and started chasing him. “A stick! I’ll fetch it and drop it and play throughout the day,” barked the dog. “I’m not a stick. Why can’t you see? I’m a Stick Man and I want to go home to the family tree,” cried the Stick Man. There was a notice board which read, “Dogs must be kept on the lead!” At last, the game was over and Stick Man was free. He set off for the home with a hop and twirl. 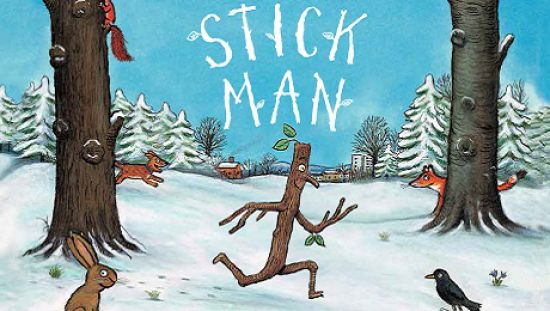 As he was walking back towards home, a girl saw him. “A stick!” cried the girl with a smile on her face. “The right kind of pooh-stick for winning the race! Has everyone got one? Get ready to throw! It’s 1… 2… 3… Into the river they go!” “I’m not a pooh-stick! Why can’t they see? I’m Stick Man and I’m heading away from the family tree,” he cried.

Stick Man floated on and on. Soon, a swan saw him and thought it was a twig. “This twig is the best. It is the right kind of twig to weave my nest,” said swan. “I’m not a twig! Why can’t they see? I’m Stick Man and I long to be back in the family tree,” he cried. Soon, the nest was deserted and Stick Man was free. He drifted down the river and sailed out to sea. He tossed and turned till the frolicking foam.

Next, he reached a beach which was far away from his home. There was a dad with a spade in his hand. A dad and a son was making a castle out of the sand. “An excellent mast! Hooray! There’s a flag on our castle at last,” cried dad. Stick man became angry and said, “I’m not a mast for a silly old flag or a sword for a knight or a hook for a bag, I’m neither a pen nor a bow, I’m not a bat or a boomerang! I’m a STICK MAN!” Also, read Nutcracker Story.

It had been so long Stick Man did not go home. It was now winters. A boy with a warm, woolly scarf picked it up. “An arm for my snowman!” he said with a laugh. “I’m not an arm! Can nobody see? I’m Stick Man! Will I ever get to the family tree?” he sighed. Stick Man was sad and lonely. He was lost. He was frozen and covered with frost. Stick Man was weary and his eyes started to close. He stretched and yawned and soon fell fast sleep.

It was Christmas Eve! He couldn’t hear the jingle of the bells and the sweet singing choir. A voice said, “Here’s a good stick for the fire!” But Stick Man was lying asleep in the grate. While sleeping, he dreamed of his kids and his Stick Lady Love. Suddenly, he woke up and heard someone shouting for help. “Ho, Ho, Ho! I’m stuck! Get me out,” a voice cried. “A Stuck Man! Who can that be? Don’t worry! I’ll set you free,” assured Stick Man.

With a scratch and a poke and with lots of efforts, Stick Man finally succeeded. It was Santa Claus who fell with a thump! “Stick Man, you are an excellent friend! Thank you for saving me,” said Santa. Then, Stick Man helped Santa in delivering the toys to fast asleep girls and boys. You may also like to read, Snowman Short Story.

Faster and faster they flew through the snow, till Santa said, “Only one chimney to go! Ho, Ho, Ho!” Stick Lady and her children were missing Stick Man. It would not feel like Christmas without their Stick Dad. Suddenly, they heard some clattering sound. “Someone is tumbling, Stick Mom,” cried the kids.

It was Stick Man and he decided to stick right there with his Stick Lady Love and his kids in a family tree. It was Santa who fulfilled Stick Man’s wish and made his Christmas merrier than ever. Santa also gifted each of his child their favorite toys.

Here is a short visual depiction of the “Stickman Story“. See the video story below,