Story Of Abraham And Sarah And Hagar

This is the Story Of Abraham And Sarah And Hagar for kids. Long, long time passed and Abraham and Sarah did not have any children as God had promised them. Sarah was impatient and so she sent her maid, Hagar to Abraham and said, “Have a baby with Hagar and if she has a son, we can raise him as ours.” Also, read Abraham And Sarah Story.

Soon, Hagar and Abraham had a baby boy and named him Ishmael. But he was not a part of God’s plan. Few days later after this, Sarah had a son just as God promised as she named him Isaac which means laughter. Sarah had laughed once when God said that she would have a baby. Once Isaac was born, Sarah became jealous of Hagar and her son. 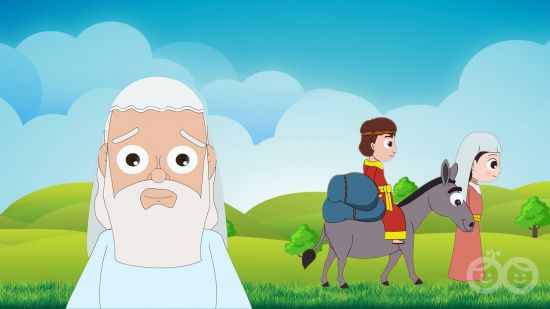 story of abraham and sarah and hagar Image Source @www.youtube.com

One day, Abraham threw a party for young Isaac where Sarah heard Ishmael making fun of Isaac. She became very angry. She told Abraham, “Send Hagar and her son away. I don’t want Ishmael to share my Isaac’s inheritance.” This made Abraham very upset. Ishmael was his son too.

The next day, Abraham got up early in the morning and gathered food and water for Hagar to take as she and Ishmael left. He was sad to send them away. Hagar and Ishmael wandered for days and had nowhere to go. Soon, the water they had brought ran out. Hagar left Ishmael sitting in the shade of the bush and walked a short distance away from him. You may also like to read, Abraham And Isaac Story.

She sat down and thought to herself, “I can’t stand and watch my son die,” and tears rolled down her face. Meanwhile, Ishmael was crying and God heard him. God’s angel came to Hagar and said, “Don’t be afraid Hagar. God has heard your son’s cries and promises to make him into a great nation. Go and comfort your little boy!” The angel vanished. Suddenly, a well appeared in front of Hagar which was full of water.She filled the jar and gave Ishmael a drink.

After wandering the wilderness for many days, Ishmael and Hagar finally settled in the Desert of Paran. There, he became an expert in archery. Years passed and Ishmael grew up to become a strong, young man and he married an Egyptian woman. Soon, the couple was blessed with the twelve sons and they lived happily. Also, read Abraham And Lot Story.

Here is a short visual depiction of the  “Story Of Abraham And Sarah And Hagar“. See the video story below,

Story Of Abraham And Sarah And Hagar Video