This is the Story Of Ramayana. Long ago, the wise King Dasharatha ruled over the Kingdom of Ayodhya, on the banks of the river Sarayu. Though the King had three wives, he didn’t have any children. The chief priest Vasishta advised Dasharatha to conduct a fire sacrifice to obtain a boon from the gods. He did so and the gods were pleased. One of them appeared out of the flame and handed him a pot full of nectar. The god told Dasharatha to share the nectar with his three Queens- Kausalya, Kaikeyi, and Sumitra.

In time, the three Queens gave birth to sons. Kausalya had Rama, Kaikeyi had Bharatha, and Sumitra had twins, Lakshmana and Shatrughan. The whole Kingdom rejoiced. The four young Princes were intelligent and good-natured. They loved each other, but there was a special bond between Rama and Lakshmana. Also, read Eklavya Story. 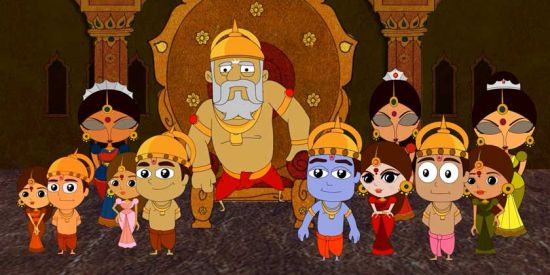 Image Source@ anibrain.com. One day, sage Vishwamitra came to Dasharatha and asked him to sent Rama to the forest with him to kill a demon who was continuously disrupting the fire sacrifices of the sages. Dasharatha sent both Rama and Lakshmana with Vishwamitra and Rama was able to kill the hideous and terrible demon Tadaka. Vishwamitra was very pleased and so were the gods.

Vishwamitra then took the young Princes to the neighboring Kingdom of Mithila which was ruled by King Janaka. In Mithila, Rama succeeded in stringing a great bow given by Lord Shiva, which many before had tried and failed. This won him Janaka’s daughter Sita in marriage. Rama married Sita and they lived happily for many years. Dasharatha decided that it was time for Rama to become King. Everybody was pleased because Rama was a kind, Prince.

However, Kaikeyi’s maid, Manthara was not happy. She wanted her Queen’s son, Bharatha, to become the King. Manthara poisoned Kaikeyi’s mind. She decided to ask Dasharatha for the two boons he had promised her. Kaikeyi asked Dasharatha to make Bharatha the King and send Rama away to the forest for fourteen years. King Dasharatha was heartbroken but he was bound to keep his promise. Rama left for the forest without hesitation, accompanied by Sita and Lakshmana. The whole Kingdom was grief-stricken and Dasharatha died soon after.

Bharatha was horrified by what his mother had done. He went to the forest to persuade Rama to return. When he refused, Bharatha took Rama’s footwear and placed it on the throne. He said he would rule till Rama returned. Rama, Sita, and Lakshmana lived in the forest amidst the beauty and peace of nature’s treasures. Birds sang, streams gurgled and flowers bloomed in thousands. You may also like to read, Lord Buddha Story.

One day, a terrible thing happened. A she-demon called Soorpanakha saw Rama and wanted to marry him. When Rama refused, she asked Lakshmana to marry her. Angry at his refusal, she attacked Sita. On seeing this, Lakshmana rushed to help Sita. Soorpanakha went to his brother, Ravana, the King of Lanka and asked him to punish them for insulting her.

Ravana sent his uncle Mareecha who took the form of the golden deer to attract Sita. On seeing this, Sita asked Rama to catch it. Rama chased the deer and finally shot it. As Mareecha lay dying, he used his magic and called out for Lakshmana in Rama’s voice. Hearing Rama’s voice, Sita was afraid and sent Lakshmana to help him. Before leaving, Lakshmana drew a magic line to protect Sita and asked her not to cross the line under any circumstance.

As soon as Lakshmana left, Ravana came in the guise of the sage. He was offended when Sita told him that she couldn’t cross the line to give him food. On seeing him angry, Sita forgot Lakshmana’s warning and crossed the line. As soon as she crossed the line, Ravana grabbed her and flew away to Lanka. Hearing her cries, Jatayu, the King of Eagles tried to help her but Ravana wounded him badly.

Rama and Lakshmana set out in search of Sita. Jatayu told them that Sita had been abducted by Ravana. On their way, Rama killed demon Kabandha releasing him from the curse. The demon advised them to meet Sugriva, who would be of great help in finding Sita. They took the demon’s advice and met Sugriva. Sugriva agreed to help only if he killed Bali, who was Sugriva’s brother. Rama defeated Bali and Sugriva became the monkey King. Keeping his promise, Sugriva asked his chief, Hanuman, and his entire army to help him.

Rama sent Hanuman in search of Sita. Hanuman found Sita in one of the gardens of Ravana’s palace. He gave her Rama’s ring and told her that Rama would come and rescue her soon. Ravana’s soldier caught Hanuman and took him to Ravana. Hanuman then asked Ravana to set Sita free but Ravana refused. He caught Hanuman and set his tail on fire. Hanuman flew high over the city and left many parts of it in flames.

Rama, Lakshmana, and Sugriva then rounded up a huge army. A bridge was built to Lanka and the army marched across. A fierce battle began. Thousands of great warriors of both armies were killed. Ravana’s army was losing. He called on his brother Kumbhakarna who had the habit of sleeping for six months at a time, for help. After eating a mountain of food, he appeared on the battlefield striking terror. Rama killed Kumbhakarna.

Indrajith, Ravana’s son, who was the great warrior and had the power to become invisible took command. He injured Lakshmana with a magic arrow. Lakshmana lay unconscious till Hanuman flew to the Himalayas and brought a herb that helped revive him. Lakshmana killed Indrajith and finally, Ravana and Rama came face to face. It took many days before Rama could finally kill Ravana with a weapon given by the Gods. Also, read Phoenix Story.

Finally, Rama and Sita were united. The fourteen years of exile was over and they returned to Ayodhya. People rejoiced and came out to receive him. The celebrations went on for many days. The Gods smiled down on the new King, who brought prosperity and happiness.

Here is a visual depiction of, “The Story Of Ramayana”. See the video story below,

The Story Of Ramayana Video