Story Of The Twelve Dancing Princesses

This is an amazing short story of the twelve dancing princesses. Once there was a king who had twelve daughters. They all were very beautiful. All the princesses slept in a large room. In the evening, the king would lock them inside. The king of Belloy was caught in a fix. Every night his twelve beautiful daughters went to bed with new shoes, but when they woke up the next day, their shoes always had large holes in them and were completely worn out. The king desperately wanted to know why this was happening, but he never did learn anything.

It was then the that the king declared, “Any man who can solve the mystery shall marry one of my daughters as per his choosing and shall be the king after me!” As the news of the king’s glorious proposal spread far and wide, many young princes arrived at Belloy to win the hand of a beautiful princess of their choice. They were all well looked after by the king. 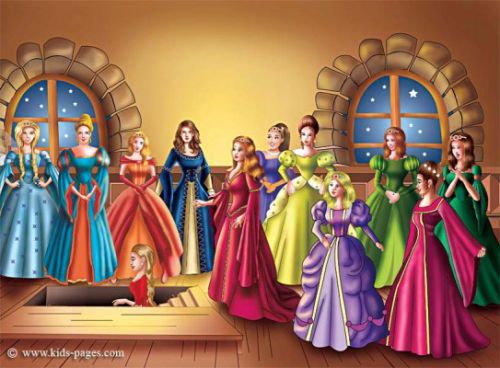 The king then explained to these fair princes, “Let the rules be very clear. You shall all get a chance to find out where my daughters go every night. And if you are successful, you will get to choose any one of my daughters as your bride. However, if you can’t find out anything in three days time, you will turn into stone!” The princes were confident about getting to the bottom of this mystery. But, every night they fell into deep sleep and no matter how much they tried, they just couldn’t keep their eyes open. As soon as the three days were over, all the princes turned into stones as per the king’s warning.

One day, a soldier was passing through Belloy when he chanced to hear about the king’s offer from an old lady. He told her, “This seems like a fair contest. And now that I am too tired to fight, I would very well like to be the king. I want to go and try to solve the mystery of the princesses.” The old lady shrugged her shoulders and said, “Now that should not be so difficult. just don’t drink anything given to you by the princesses at night, and all will be fine!” Then she gave him a cloak and continued, “If you wear this then you will become invisible.”

The soldier thanked the old lady and set off for the palace. After dinner there, when he was getting ready to keep watch on the princesses, the eldest princess walked up to him and offered him some wine. “It will help you to stay awake,” she said. The soldier remembered the old lady’s warning and politely accepted the wine but he didn’t drink it and threw it away when she was not looking. As the Princess went back to join her sisters, he overheard her say, “He will fall asleep right away, so we can be on our way shortly!”

The soldier pretended to fall asleep at once, snoring as loudly as he could. Soon he heard a sound in the princesses room. He peeped through the door and saw the beds starting to move away and a trap door reveal itself under it. Realizing that the princesses would be going away through the trap door, the soldier put on his cloak of invisibility and followed them. He saw the twelve princesses walk to the river’s edge, where they were joined by the twelve handsome princes. Soon the couples started dancing and making merry.

It was a magical place with trees of silver, gold and glittering diamonds. The soldier snapped several branches of these magical trees as proof for the king. Hearing the noise, the youngest princess exclaimed, “Something doesn’t seem to be right today. Something very bad will happen!” But the eldest princess declared, “Oh, you worry too much! Did we not turn those earlier princes to stone. Don’t worry, we’ll take care of this soldier too!”

However, the next morning the soldier told the king about the events of the previous night. He also presented the branches of gold, silver and diamond before the king as proof. The king believed the soldier and asked him to choose his bride. The soldier declared, “As I am quite old myself, I shall choose your eldest daughter to be my bride!”

Within a few days, the king gave his eldest daughter’s hand in marriage to the soldier, who one day went on to become the new king of Belloy.

Here is a visual depiction of this short story of the twelve dancing princesses. See the video story below,