Story Of Woodcutter And Good Deed

This is the story of woodcutter for kids. One cold and windy winter day, a woodcutter was on his way back home from the woods, carrying a big bundle of chopped wood. The long, sharp axe he used to chop wood was attached to his belt. As he was walking along the path that wound through the woods, he saw a snake on the path ahead of him.

He put down the wood he was carrying to look at the snake. It looked like it was dead. The kind woodcutter felt very sorry for the poor creature as the weather was very cold. So, he took off his coat and put the snake on it. He then wrapped it up tightly. “I shall take him home and try to revive him,” he said to himself. The woodcutter left his bundle of wood behind. “I shall come back for it later,” he thought. You may also like to read, The Honest Woodcutter. 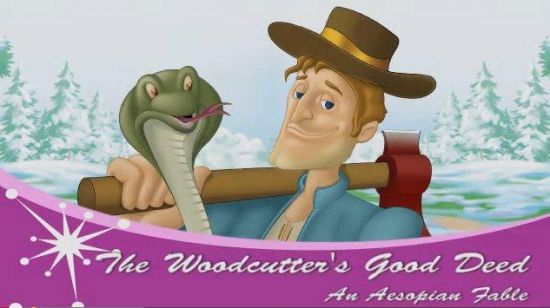 Image Source–> www.justbooksreadaloud.com. He began walking to his house carrying the snake in his arms, tightly warmed up in his coat. When he reached home, his family was very curious to see what was in his coat. “What have you brought home?” they asked in wonder. But seeing that he was shivering from cold, they stopped questioning him and quickly lit the fire.

Once the fire was burning brightly and he had gotten nice and warm again, he turned to his daughter and said, “Lay out a cloth in front of the fireplace, little one.” His daughter rushed and did at once. He then unrolled his coat and to the astonishment of his family showed them the snake within. They gasped in amazement! He then took the snake and placed it on the cloth in front of the fireplace.

His children and wife stood a good deal away from the fireplace as they were afraid of the snake. “We shall not come near it, Father. We are afraid!” the children exclaimed. Slowly, the fire began to warm the snake and soon it managed to uncoil itself. The snake then turned its head and looked at the woodcutter and his family who were standing nearby. Also, read The Woodcutter And The Tiger.

Suddenly, it slithered across the room to where the children were huddled. It reared its hood and bared its ugly fangs and was about to strike the little girl. But quicker than a wink, the woodcutter crossed the room. With his handy axe, he struck off the snake’s head. He gathered up his little daughter in his arms. He vowed never again to try and help such ungrateful creature, for it was all in vain.

Here is a visual depiction of the, “Story Of Woodcutter And Good Deed”. See the video story below,