This is an amazing sun and moon story to read for kids online. Long ago, there lived a mother, brother, and sister. One day, the mother went to help at the party. “Watch the house well. I will bring some delicious pancakes and rice cakes,” said the mother. The brother and the sister thought of the rice cakes and waited for their mother.

It became dark in the mountain. The mother was hurrying home worried about the children but a dark shadow appeared. It was a scary tiger. The tiger said, “I won’t eat you up if you give me rice cake.” The mother gave the tiger a rice cake and it went into the jungle but the tiger kept asking for more again and again and ended up eating the mother too. 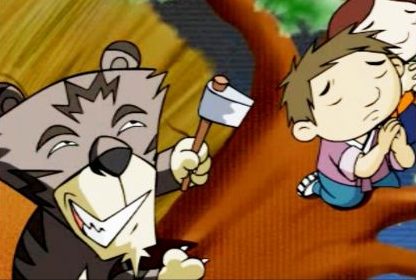 Image Source@youtube.com. The tiger put on the mother’s clothes and went to the house. The children thought that their mother was back and rushed to the gate but they were surprised to see the tiger in their mother’s outfit. The tiger’s paw had sharp nails and the tiger’s teeth were scary. The children hugged each other and trembled. They ran to the backyard and went up the tree.

The tiger came near the tree and asked the children, “Children! How did you go up the tree?” “We used some sesame oil and came up,” the kids answered quickly. He put the sesame oil in his paws and tried to go up the tree, but he slipped down. The children laughed at the tiger. The girl said, “You should have used the ax!”

They both went high up in the sky. And the god blessed them with the powers. The brother became the Sun and the sister became the Moon!

Here is a visual depiction of this amazing sun and moon story to read for kids, “Tale Of The Sun And The Moon“. See the video story below,