This is one of the cute princess bedtime stories for children. Once upon a time, there lived a Prince named Sutton. He was fond of traveling and visiting the distant lands.

One day, when he was riding on his horse, he saw a field fully bloomed with sunflowers. There was a big banyan tree in the field. The Prince who loved the surroundings laid down under the tree to take rest and he soon fell fast asleep. Also, read The Fairy Princess. 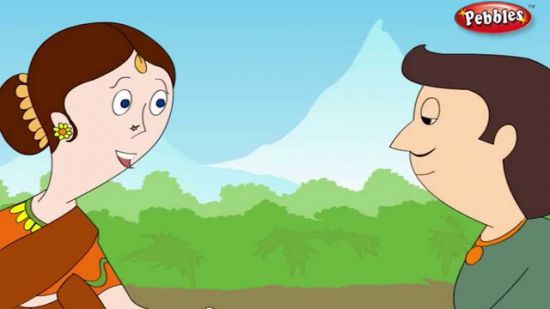 The Prince woke up at the sunset and was about to return to his palace when he sawv a beautiful girl standing on the opposite side. He had fell in love with that girl and asked her to marry him. The girl replied, “I will marry you but on three conditions.” The Prince accepted at once.

Then, she continued, “One, after marriage, you should not go back to your palace. Two, I will be with you from dusk to dawn. Three, you should never ask me my whereabout during the dayor stop me from going out. If you fail to fulfill one of these conditions, I will leave you and go away forever.” The Prince accepted the conditions and married her.

They built a beautiful palace in the field and began a happy life. The Princess left the palace in the dawn and returned only after sunset. This went on for many days. The Prince was always curious and eager to know where she was going. Also, read Princess September Summary.

One day, he woke up before the Princess could wake up but he pretended to sleep. As usual, she left the palace quietly early in the morning. The Prince followed the Princess secretly. She walked in the field of sunflowers and suddenly disappeared. The Prince was puzzled and thought, “Where is the Princess? There is no place to hide, where could she go?”

He thought for a while and finally, came to a decision. He went from each flower to flower, observed each flower, and stood looking a sunflower for a long time. Gathering courage, he pluckled the flower. It was no more than a miracle! The flower disappeared and his wife stood there. She thanked him for saving her from a curse.

She asked him, “How did you recognize me among so many sunflowers?” He replied, “All the flowers had dew drops on their petals but dew drops were not on you because you were with me during the night. So, I was sure that the flower without dew drops is you. So, I plucked it.”

The Prince then took the Princess with him to his palace and lived happily ever after. You may also like to read, The Princess On The Glass Hill.

Here is a short visual depiction of one of the cute princess bedtime stories “Sunflower Princess“. See the video story below,