This is The Swan Lake Story. Once upon a time, there was a handsome Prince. His name was Siegfried. One day, he went hunting in the forest and came upon a beautiful lake. He saw many white swans playing in the water. As it became night, the swans went ashore and one by one changed into beautiful girls.

One of the girls was much more beautiful than the others. The Prince couldn’t help but approach her and say, “I’m Prince Siegfried. If you have any trouble, it’s my wish to be of assistance to you.” “I’m Princess Odette. My servant girls and I were put under a curse by the sorcerer Rothbart. That is why we became swans.” Also, read Wild Swans. 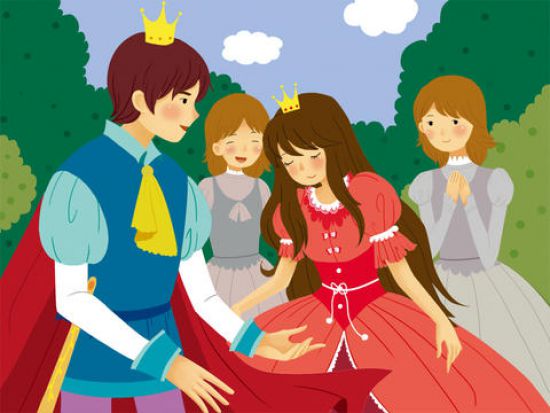 Image Source–> http://www.oczone.cn. When the Prince looked at Princess Odette, his heart was moved with pity for her. “Rest assured. I’ll go look for this Sorcerer Rothbart and try to break the spell. I’ll take revenge for you!” The Prince was determined. Suddenly, an owl flew out from the dark of the forest and began attacking the Prince. It was Sorcerer Rothbart who had changed into an owl. There was not a hint of fear on the Prince’s face.After a few rounds with the owl, he had chased him away. Odette was very appreciative of him.

“Beautiful Princess, how can I break the curse?” he asked. “Only if you publicly ask for my hand in marriage will the sorcerer’s curse be broken and I can return to normal,” said the Princess bashfully. The Prince grabbed the Princess’ hand and said, “That’s easy. Tomorrow evening, my mother is holding a banquet for me to choose a bride. I’ll ask for your hand in marriage in front of everybody.”

The next day, a ball was held in the palace. Many pretty girls attended the ball, but the Prince considered no one but Princess Odette. As the ball was about to end, a noble, beautiful Princess ran into the palace from outside. The Prince excitedly grabbed her hand and announced before everybody, “Princess Odette is the girl of my dreams. I’ve decided to marry her.” You may also like to read, The Crow And The Peacock Story.

“Prince, that girl is Rothbart’s daughter. I’m the real Princess Odette!” said the girl outside the palace entrance. The Prince turned around and looked, “Yes, you’re Princess Odette. How could I ever forget your most beautiful yet sad countenance.” The fake Odette completely changed back into her evil self. “Haha! Too late! You’ve already asked me to marry you. My father’s curse will never be lifted.”

Suddenly, Sorcerer Rothbart appeared. Infuriated, the Prince pulled out his sword. In a flash, he lunged toward the sorcerer and with one stroke stabbed him in the throat. The sorcerer fell over dead in a pool of blood. “Now, I’ll never be able to change back to normal!” Princess Odette overridden with despair ran over to a cliff. She jumped head first into Swan Lake. When the Prince saw his beloved fall off the cliff, his heart was shattered and jumped in after her.

Before long, the sun came out and it was daylight. Strangely, the girl servants didn’t change into swans. Tears fell from their eyes as they said, “The Prince and Princess sacrificed their lives in exchange for our freedom.” Suddenly, a miracle occurred. The Prince and Princess Odette came up out of the water. The Prince’s love for the Princess had deeply moved god. Thus god not only removed the curse but also saved them from the water.

Here is a visual depiction of, “Swan Lake Story”. See the video story below,