This is an awesome Short Fairy Tale for kids. Far above in the heaven, there was a Fairyland. There lived many fairies. Some were beautiful, some were ugly; some were good and some were bad. Amongst them, there was a fairy named Tania. She was an honest and good fairy. There was another fairy named Manna. She was cunning and a wicked fairy. Tania loved to help people and make them happy, whereas Manna would always trouble people and make them cry. Also, read The Enchantress And The Apple Tree.

Once, the Queen of Fairyland called Tania and Manna and said to them, “Now, you both have grown up. I want you two to go to Earth and learn something there.” Tania and Manna were happy to hear this. The Queen further said, “Take care of yourself! Don’t trouble anyone or else I’ll punish you.” 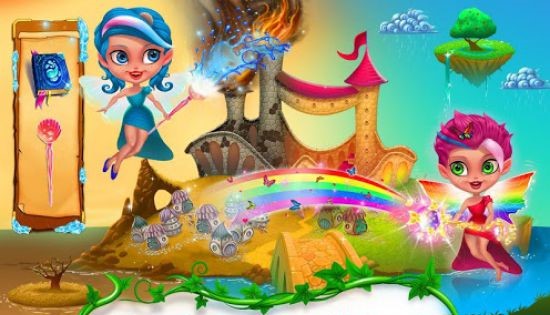 Image Source@ play.google.com. Tania and Manna traveled in a fairy-plane and landed on the Earth. Both the fairies were happy as well as excited to land on the Earth. They dressed up as normal human beings so that no one could recognize them.

One day, Tania saw a small girl crying on a roadside. She asked her, “What is wrong with you? Why are you crying?” The girl said sadly, “I’m hungry and sick. My parents are dead and I don’t have any home.” Tiana felt sorry for her. She used her magic to build a small house for that poor girl. Tania also gave lots of food and money to her.

On the other hand, Manna was busy troubling people. Manna stole the stick of an old man with her magic. She also used her magic to color the hair of an old woman bright red. She also spoiled a lovely garden full of flowers with her bad magic.

After a few days, the Queen fairy called Tania and Manna back to the Fairyland. She called both of them to her palace and said, “Tania and Manna, I want to give each of you something! I was watching you in my magic ball while you were on the Earth. Tania used her magic to help people. I’ll give her a diamond crown as a gift.” The Queen took out a shiny, diamond crown from a box and placed it on Tania’s head. She looked beautiful.

The Queen spoke again, “I’ll punish Manna for troubling people. Manna will not be able to use her magic forever.” Manna felt sad and went away with a heavy heart. Good fairy got the reward while the bad fairy was punished. Also, read Cleopatra And The Magic Flute.