This is one of the popular Tenali Raman short stories for kids. It was well-known that King Krishnadeva Raya was fond of birds and animals. He had many beautiful and rare birds and animals in his palace.

One day, a visitor came to the court with a strange looking bird in a cage. Bowing low before the King, he said, “Your Majesty, I caught this strange but beautiful bird in the forest yesterday. It can sing sweetly like a cuckoo and can also talk like a parrot. It is not just as colorful as the peacock, but it can dance like one, too. I have come to sell this bird to you!” Also, read Tenali Raman And The Proud Priest. 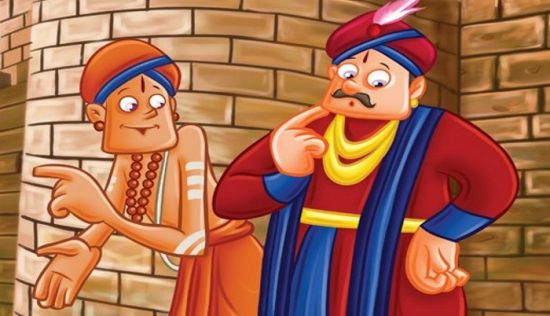 Image Source@ topyaps.com. The King saw the colorful bird and said, “Yes, this bird does look rare! It is also quite beautiful. I will keep it!” He ordered the court treasurer to give the visitor fifty gold coins and put the cage in the palace garden.

Just then, Tenali Raman got up and bowing before the King said, “Your Majesty, I am sorry to disturb you but I don’t think this bird can dance like a peacock in the rain. If you let me. I would like to prove it to you!” The King was confused. He nodded his head allowing Tenali Raman to prove his point.

Tenali Raman picked up a big jug of water and poured it on the bird in the cage. Colored water started flowing off the bird’s body. Everyone in the court was surprised. Tenali Raman continued to pour the water on the bird. The rare and colorful bird turned into an ordinary light brown pigeon. The King was very surprised.

Looking first at the bird and then at Tenali, he asked, “How did you realize that this bird has been dyed in false colors?” “From the visitor’s nails, Your Majesty! The colors he used on the bird are still present on his nails and fingers!”

The visitor tried to run away but the palace guards caught him and put him in a prison. And the fifty gold coins were rewarded to Tenali Raman for his intelligence and great presence of mind. You may also like to read, The Mango Tree.

Here is a short visual depiction of one of the Tenali Raman Short Stories “The Tell Tale Nails”. See the video story below,