Tenali Raman And The Proud Priest

This is one of the best Tenali Raman stories. Subba Shastri was a learner priest at King Krishna Deva Raya’s palace. However, he was very proud and thought that he was better than everybody else. He was jealous of the clever Tenali Raman and always tried to insult him. At first, Raman ignored him, but when he couldn’t stand any longer, he waited for his chance to teach the vain priest a lesson.

One day, the king bought some fine Persian horses for his army. Seeing Raman standing nearby, the king gave him one horse and ordered him to take good care of it. Tenali Raman gladly accepted the horse. He decided that this was his chance to teach Subba Shastri a lesson and made his plans. 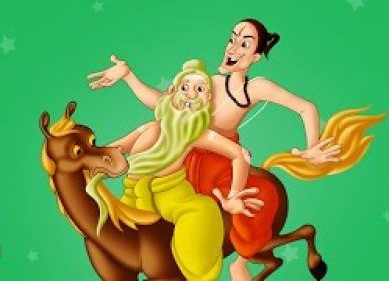 Image Source@ www.cyberspaceandtime.com Raman built a special stable for the horse. It was covered from all the sides and had just one small window. Once a day, he fed the horse just one bundle of hay through this window. So, the poor horse remained hungry most of the time and would just wait to grab the hay.

A month later, the king asked to see his Persian horses. He was pleased to find that all of them were strong and well trained. Just then, Subba Shastri asked, “But where are Raman and his horse?” Immediately, a guard was sent to fetch them both. Raman quickly came to the king and said, “Your majesty! The horse is very stubborn and will not obey me! I request you to send Subba Shastri with me to the stable to help me since he is clever and knew so much about everything.”

Subba Shastri was thrilled and boasted, “Yes! I know the science of horses and can easily bring it here.” So, he went with Tenali Raman to the stable. Once they reached the stable, Subba Shastri said, “Stay away Raman! This is no job for an ordinary gesture!” He put his head through the tiny window to take a look at the horse. The hungry horse thinking that the priest’s long white beard was hay, the horse tore his beard and would not let go.

Poor Subba! He was in pain and started screaming for help. Raman and his followers broke the stable. The horse still holding Subba Shastry’s beard in its mouth came out. They all walked back to the king. When they reached the court, everybody, including the king, burst out laughing.

However, the king soon understood that this was Raman’s trick. He scolded him and told him to apologize to the priest. But, Subba Shastri had learned his lesson. Before Raman could say anything he said, “No, it was my fault. I have always humiliated him but until now he has kept quiet.” He apologized to Raman and was never mean to anybody again.

Here is a visual depiction of one of the awesome Tenali Raman stories, “Tenali Raman And The Proud Priest Story”. See the video story below,