This is an amazing story with moral lesson for kids. Terry has a friend named Fear. Terry and Fear have been friends for a very long time. Fear loved being friends with Terry because he always made Terry fearful of things. Terry knew that Fear was a bad influence. However, Terry didn’t know exactly how to deal with Fear.

When Terry decided to try out for his school’s basketball team, Fear said, “Terry, you shouldn’t try out for basketball team because you’re not going to make it.” When Fear stayed the night at Terry’s house, Fear said, “Terry, there’s something lurking in the closet.” Terry became fearful and always slept with the covers pulled over his head, and with his bedroom light on every night. You may also like to read, The Balloon. 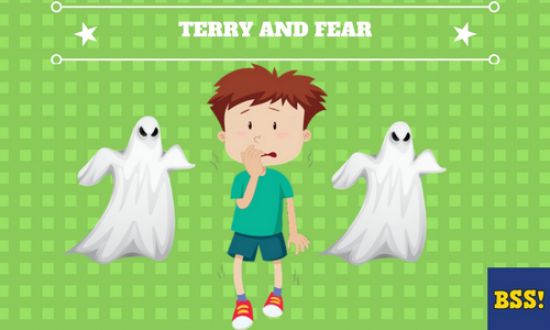 story with moral lesson for kids

Terry and Fear were in the same classroom. When it was time to take their spellings tests, Fear said, “Terry, you are going to make a bad grade because the words are hard to spell.” Even though Terry had studied very hard, he did not take his spelling test because of what Fear told him. Mr. Johnson, Terry’s teacher sent a note home to Terry’s parents.

Terry’s father was upset with Terry for not taking his spelling test. “Terry, why didn’t you take your spelling test?” asked Terry’s father. “Fear told me that I would make a bad grade because the words were too hard to spell,” replied Terry. “I want you to stay away from Fear,” said Terry’s father. “He’s a bad influence and he will stop you from making right decisions.”

The next day, before going to school, Terry’s mother asked, “Terry, did you sleep with your bedroom light on again?” “Yes, Fear told me that something was lurking in my closet,” replied Terry. “There’s nothing in your closet,” said Terry’s mother. “I want you to stay away from Fear because he’s a bad influence. If you keep listening to him, you’re always going to be fearful of things.” Also, read Tit For Tat.

When Terry arrived at school, he noticed two new students in his classroom. Terry wanted to become friends with the new students but Fear said, “Terry, you shouldn’t be friends with them because they will not like you.” One of the student’s name was Boldness. The other student’s name was Courage. She was nice and friendly also. Boldness and Courage were liked by everyone in the classroom, except Fear.

Terry no longer wanted to be friends with Fear because Fear refused to change his ways. “Fear, I don’t think we should be friends anymore because you’re always trying to make me fearful of things. I wish you the best but you’re not a good influence or friend. I have decided to be bold and have courage.” Fear was upset as he could no longer cause Terry to be fearful. You may also like to read, The Good Side Of Things.

The next day, when Terry returned to school, Terry noticed that Fear was absent. “Where is Fear?” said Terry to his teacher, Mr. Johnson. “Fear is no longer with us,” said Mr. Johnson. “He moved to another school.” Thanks to Terry’s new friends, “Boldness” and “Courage”. Terry never had to worry about how to deal with Fear again.

MORAL: BE BOLD AND COURAGEOUS ENOUGH TO BE YOUR TRUE SELF.