The 7th Voyage Of Sinbad

On the seventh day, Sinbad the sailor began the tale of his last journey. “The journey had profited me immensely. But all the wealth in the world could not keep from the sea. I again set out with like minded people, looking for a good trade. We soon halted at Madinat-al-Sin. There all of us merchants made a hefty profit. Also, read Sinbad’s Second Voyage. 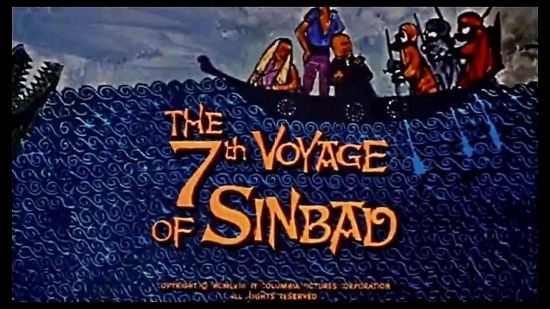 Soon after we left the island, we were hit by a strong wind. It started to rain too. We were drenched in the water and so was our cargo. All of us prayed to Allah and asked him to save our lives. When the storm passed, we all sighed in relief. But the relief didn’t last long. The captain had climbed the mast and was screaming. Also, read Sinbad’s Third Voyage.

He told us that the wind had driven us to the farthest corner of the world. And he was sure that we would die here. He pulled out a book and explained that the sea was called “The Sea of the King”. Also, that Solomon, the son of David was buried underneath the waves. The captain also told us about the massive serpents that lived beneath. We were told that the serpents could eat the ship all at once.

No sooner had the captain finished, we heard a loud thunder. Soon a huge fish stuck its head out. Then came another and then the third. The three of them began circling us. The third and the biggest opened its mouth to swallow us. The mouth of the fish was as huge as a gate of a city! All the men began to cry to Allah for help.

At that moment, a strong wind blew and made our ship slide over to a reef. The ship shattered at once, and we were thrown into the waters. I somehow managed to hang onto a plank. At that moment I began lamenting. I screamed at myself for being too greedy and now I was stuck here, and I could die. After a while, I came to my senses and promised myself that I would never travel again. Neither on the actual sea nor in my dreams.

For two days, I continued like that on a plank. Finally, I came to an island. There, I ate fruits and found a river of sweet water. Like so many times before I tied up logs and made a raft. I set it out on the stream. I didn’t take anything to eat along with me, and I grew weak in the following days.

One day, I passed a valley. And suddenly, a great fall up ahead caught my attention. I thought I’ll be thrown off and smashed into pieces! I began praying to Allah to save me from this. In the despair I was in, I failed to notice that a fisherman had cast his net. He hauled me to the bank just before I reached the fall.

I found that many people had come down from a city nearby. I was invited by an elderly man, who was richly dressed, to stay with him in his mansion. Once at his mansion, I was well fed. In the evening I went to my room. I was told that I could ask the servant to bring anything I need to the room. So, the next three days I ate and drank well restoring my mind and body. You may also like to read, Sinbad’s Fourth Voyage.

Then, on the fourth day, the host came to me asked me if I wanted to sell my goods in the market. I told the man that I had lost my goods. In the market, I found that the servants had brought my raft. One man agreed to pay hundred silver coins. But the host offered me hundred and fifty and pressed me to take up his offer. So I did.

When we returned, he told me that in all his life he had never met a man who survived more than three shipwrecks. He asked me to marry his daughter. At first, I made no reply, but he continued to press the matter and I agreed. Soon I was married and lived happily until the day my wife’s father passed away and I became the head of the household.

Soon enough I came to know of a secret. Everyone in that city changed into a bird once a month. So I asked one of my friends to take me whenever he changes into a bird. At first, he was unwilling to do so, but he agreed. When I was up in the sky with him, I was amazed. I had always wanted to know how it felt to fly. I praised Allah and thanked him.

And the moment I did so, a great fire sprung from the heaven. All the birds scattered and my carrier dropped me at a mountain top. There I met two young men carrying rods of gold. I greeted them and asked them who they were. They told me they were servants of God. I was handed a rod of gold and then we walked. We came across a man. He was screaming to Allah for help. The moment he asked for God to help, a huge serpent came out of nowhere and almost swallowed him. Also, read Sinbad’s Fifth Voyage.

I quickly ran to help the man. Beating the serpent on its head with the gold rod I freed the man. Then we continued walking, soon after we found the men birds and one of the agreed to take me back to home. Upon my return, my wife was extremely delighted. She told me to beware of the bird men. Also that they were related to the devil and didn’t like the mention of Allah.

I didn’t feel like staying there anymore. So, I sold all my property for a fine sum of money and came back. When my friends and family heard they were overjoyed. They were surprised that I had stayed away for twenty-seven years. But I told them and promised Allah that after this seventh journey, I shall no longer take up any other voyages.

I thanked God for bringing me back to my home,” Sinbad the sailor. Sinbad the sailor told Sinbad the porter of his hardships and how he acquired his wealth. Sinbad the Porter apologised that he felt that all rich men had an easy life. After that, the two Sinbads remained friends. You may also like to read, Sinbad’s Sixth Voyage.