The Adventures of Huckleberry Finn

Huck’s father, Pap, was a mean father who drank and drank. After Huck’s father left town and certain things led to Huck finding treasure, Huck was adopted. Widow Douglas adopted Huck and tried to turn him into a well-mannered boy. 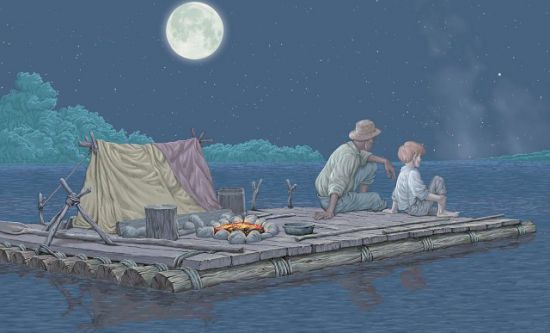 the adventures of huckleberry finn

Image Source@ prezi.com. Initially, Huck could not cope with the cleanliness, school going and church going. But Tom Sawyer, his friend, persuaded him otherwise. Now, Huck wanted to be a “respectable man”. Soon Pap returns and he wants his son back. Judge Thatcher tries to help Widow Douglas in keeping the legal custody of Huck. But another judge in the town thinks it is best for Huck to live with his father.

This judge even takes Pap to his house. All in hopes that Pap will become a better man. But Pap does not. He tried to harass Huck. Meanwhile, Huck has learnt to read and has become well-mannered. When Widow Douglas catches Pap around her house, she warns Pap. She tells him to go away. Also, read The Adventures Of Tom Sawyer.

So, Pap kidnaps Huck. Huck is taken to a house near the Mississipi River. But before things could go bad, Huck escapes. He fakes his death with the help of a dead pig’s blood. When Huck runs away, he finds an island. There, he comes to know that searchers from the town are searching for him in the river. Huck decides to stay in hiding.

He soon encounters a runaway slave. After hearing the slave’s story, Huck thinks it is best to help him. Although he didn’t know if what he was doing was right or wrong. While the two camped out, a storm makes the Mississippi river flood. These two, make a raft when they see a house floating. They loot the house.

When they do so, they find a dead body inside the house. The slave, Jim, refuses to let Huck see the dead man’s face. They leave the house. Soon, Huck learns that Jim’s owner has seen smoke coming from woods. And knows that Jim is hiding there. He also learns that there is a reward for Jim’s capture. They decide to run away.

They take their raft and move downriver, towards Ohio River. Slavery was prohibited there. On their way, these two run into a gang of robbers. Huck and Jim are captured. But in the end, they run off with the robber’s treasure.

They continue towards the Ohio river. But during night time’s fog, they miss the mouth of the river and float to the people looking for Jim instead. Upon being accused of stealing another person’s property, Huck lies. He tells them that his father on the raft is suffering from smallpox. The men leave Huck and go away. Next night, a steam boat rips the raft into two. And the two of them are separated.

Huck ends up at the house of Grangerfords who were fighting another family, Shepherdsons. The reason for the fight was the elopement of son and daughter of the family. A gun fight broke out and many from both sides died. Before Huck could do something, Jim returns with a repaired raft. You may also like to read Treasure Island.

Jim and Huck run away. They rescue two phony aristocrats. All of them continued downriver, still. Soon, they came to a town. There they heard talks of a rich man dying and leaving his inheritance for his two brothers. The two phony aristocrats enter, pretending to be the brothers. They are welcomed by Wilk’s sisters, the dead man and soon the procedure of letting out the inheritance begins.

The townspeople were dubious of trusting the two phonies. Huck tells the oldest of Wilk’s sister about the scam. But before something can happen, the real brothers arrive. The phonies, Huck and Jim leave the town. The two phonies, then sell Jim to a local farmer. They also tell the farmer that a reward is being offered for the runaway slave.

Huck finds out and goes to rescue Jim. As it turns out Jim was being held in Tom’s aunt and uncle’s house. They mistake Huck for Tom. Tom was about to visit them. When Tom arrives, Huck tells him everything before Tom reaches the house. Tom then, pretends to be his own younger brother. They hatch a plan to escape together with Jim.

But when they escape, Tom is shot in the leg. Poor Jim gives up running away and helps Tom. While Huck went to find a doctor, Jim was bound in chains again. Next morning Tom reveals that Jim had always been free. Huck and Tom were playing a game as a payback for the troubles they caused Jim. Aunty Polly, the one with whom Tom stayed, arrives.

She then identifies the two for who they actually are. The other aunt wants to adopt Huck. But Huck reveals that he doesn’t want to be civilized and he wants to go west. Tom returns to his town, and Huck sets for the west. Also, read The Boy In The Paper Boat.