The Adventures of Sinbad

This is the short story about The Adventures of Sinbad. Once upon a time in the city of Baghdad, there lived a rich merchant called Sinbad. He was famously known as Sinbad The Sailor for he loved to travel in sea. Sinbad joined the batch of merchants and sail with them in the far away lands. Days passed by and one day they were caught in a terrible storm and the ship was broken. Sinbad and two of the merchants were saved.

After a while, they reached the Giants Land. One of the merchants was afraid. They all decided to take rest inside the cave. Suddenly, they heard a noise. A black fearful giant came. He was tall as a palm tree, and had only one eye placed in the center of him forehead. He was so frightful that the men could do nothing. He picked up the merchant who was the fattest and went away. 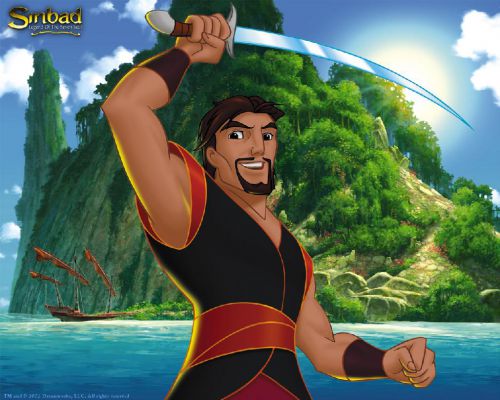 The Adventures of Sinbad- www.bedtimeshortstories.com

Sinbad and Hakim followed the giant. Soon they found the giant. The giant ate the man and went off to sleep. Sinbad and Hakim explored the place. It was the famous diamond valley. “Earlier, merchants used to come there to take the gems but now because of this giant no one dares to come here” ,Sinbad told Hakim. The giant was in a deep sleep. Suddenly, there appeared a man dressed in rags. He got scared on seeing Sinbad and Hakim. Sinbad told him that he would not harm him. A man told Sinbad that four years back, he came to this island looking for diamonds and this giant has got him as his prisoner now.

Sinbad asked him for help to get rid of this monster. He told everything what he knew. There was only one way to kill that monster. There was a sword inside the cave which was guided by a ferocious snake. Sinbad went inside and found a big snake lying around the sword. Sinbad took out his sword and killed it before even the snake could get up.

He took the sword and came out. The giant was snoring loudly and was sleeping. Sinbad went close and attacked with the sword into the giant’s eye. The giant died. Hakim and the man were very happy. They went out to find the way. There was plenty of wood available near the sea-shore. Everyone worked together and made small raft.Once it was ready, they all took the gems and set sail.

After a few days at sea, they spotted a ship passing by. They all shouted for help. The ship came near and took them. Finally, they returned to Baghdad. Sinbad went home and lived happily with his wife.

Here is a short visual depiction of “The Adventures of Sinbad“. See the video story below,

The Adventures of Sinbad Story Video

Tagged with: sinbad the sailor story, the adventures of sinbad