This is the alphabet tree story for kids. Once upon a time, there was a huge tree. It had enormous green leaves on it. On the leaves, there lived all the alphabets and so the tree was called The Alphabet Tree. They lived a happy life hopping from leaf to leaf on the highest twigs. Each letter had its favorite leaf where it would sit in the sun and rock in the gentle breeze of spring. You may also like to read, The Boy Who Cried Wolf Story.

One day, the breeze became strong and the gust became a gale. The letter clung to the leaves with all their might. But some were blown away and the others were very frightened. When the storm had passed, they huddled together in fear, deep in the foliage of the lower branches. 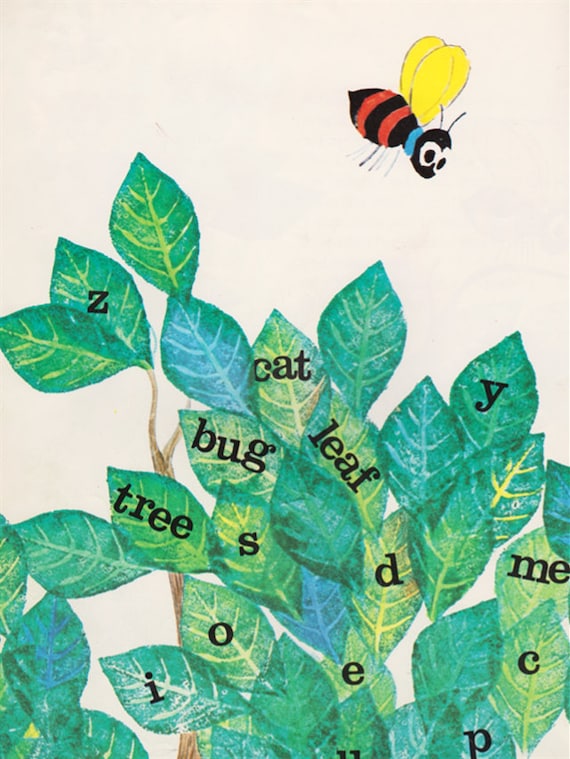 Image Source –> www.etsy.com. A funny bug, red and black with bright yellow wings saw them there hiding in the shade. “We are hiding from the wind,” the letters explained, “but who are you?” “I’m the word bug! I can teach you how to make words! If you get together in threes and fours and even more, no wind will be strong enough to blow you away!” said the bug.

Patiently, he taught the letters to join together and make words. Some made short and easy words like dog and cat, others learned to make more difficult ones like twig, leaf, and even earth. Happily, they climbed back onto the highest leaves and when the wind came, They held on without fear. The word bug had been right.

Then, one summer morning, a strange caterpillar appeared amid the foliage. He was purple, wooly, and very large. “Such confusion!” said the caterpillar when he saw the words scattered around the leaves. They said, “THE WIND IS BAD!” “LEAVES ARE GREEN!” “THE BUG IS SMALL!” “Why don’t you get together and make sentences and mean something?” asked the caterpillar. The letters had never thought of this. Also, read The Giving Tree.

The letters tried to think something important, really important. Finally, they knew what to say. “What could be more important than peace! PEACE ON  EARTH AND GOODWILL TOWARD ALL MEN!” they spell excitedly.

Tagged with: the alphabet tree