The Ape And The Bee

This is one of the most amazing Aesop Stories for kids. Once upon a time, in a dense forest lived an ape. Now, this ape had a weakness for honey. The moment the ape had tasted honey for the first time, it had instantly become his favorite. Also, read The Sheep And The Dog.

One afternoon, the ape began searching for something to eat. He had a craving for honey. So, he set out in search of honey. While he was still looking for honey, he came to a tree. “Look at that,” exclaimed the ape. Around the trunk of the tree, the ape could see a golden fluid running. “It is shining! Oh, this smell. How sweet!” 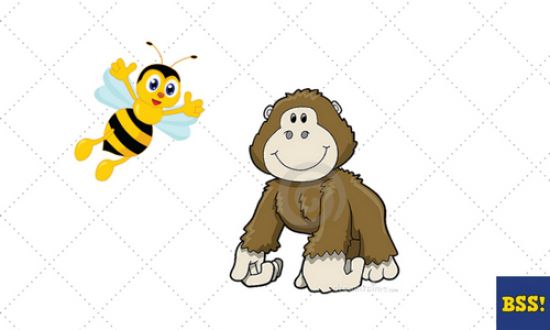 Then the ape looked up and saw that the syrupy fluid was running down a branch. And above the branch, he saw a beehive. “I am sure if I climb now and reach the beehive, I will have a tasty meal! I can taste the sweet honey from here!” The ape’s mouth started watering at the sight of the beehive.

Just when the ape was planning on his climb, his eyes fell on the bees buzzing around the beehive. “Oh, my! There are too many of them,” the ape thought. Even though he saw the bees, he was ready to climb for the honey.

Just as the ape put his paws around he gave up. “Only a week ago, I climbed this tree and ate up the honey. The meal was great. But unfortunately, I got stung by these bees. Although I want to eat the honey, I don’t want to be stung again.”

When the bees saw that the ape gave up, one of them came to ask that why did he give up. The ape told the bee that he did not want to get stung again. “But I am curious that how can someone who can make such delicious honey, sting horribly?” “Our honey is a work of hard work. And we know it is sweet. But if someone tries to steal it, our sting is just as bitter,” the bee told the ape. The ape left to look for something else. Also, read The Hen And The Fox.

MORAL: IF YOU LEARN FROM YOUR MISTAKES, YOU WON’T GET HURT AGAIN.