This is the best moral value story for kids. Once upon a time, there lived a very hard working farmer in a small village near a town. He used to grow different crops such as wheat, grains, and pulses and used to sell in the nearby shops in the town.

One day, the farmer was very sad because some mean crows would come and eat up his crops every day. He tried putting up scarecrows in they field but they would tear the scarecrows apart. He wanted to teach a lesson to all those bad crows. Also, read The Cunning Crow. 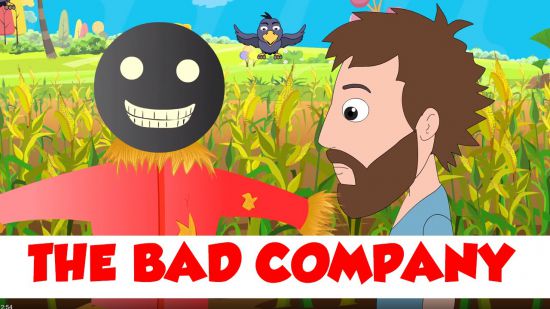 Half of the crops were getting wasted every day. When the farmer could not bear their behavior, he thought for a while. Soon, he came up with a great plan. He decided to lay a trap in his field.

The next day, like he had thought, the farmer laid a net trap in the field. He scattered the grains over the net. He did so to trick the mean crows. Immediately, the crows got caught. The trapped crows pleaded for mercy but the farmer did not listened to them. The troubled farmer said, “I will not leave any of you!”

Suddenly, the farmer heard a sad cry. He looked carefully at his net and found that a pigeon too had got trapped along with the mean crows. The farmer said to the pigeon, “What are you doing in the company of these evil crows? Now, you too will die because you kept bad company.”

The poor pigeon was punished along with the naughty crows though the pigeon was not at fault. You may also like to read, The Poor Man’s Dream.

MORAL OF THE STORY: YOU SHOULD NOT KEEP BAD COMPANY.

Here is a short visual depiction of the best moral value story for kids “The Bad Company”. See the video story below,