This is an awesome story with a moral for kids. Once upon a time, there lived a little boy named John with parents. He had lots of friends near his house. He went to play in the park regularly. John was fond of playing with gas balloons. Outside the park, a balloon seller used to sit in the evening.

One day as he was playing with his friends, they decide to compete against each other with the balloons. The condition was whosoever’s balloon reached the highest in the sky would win the game. Everyone ran to the balloon seller and asked for their favorite color balloons. John thought for a while and said to the balloon seller, “I want a blue color balloon!” “Since the sky is blue, my balloon should reach the highest,” he thought to himself. Also, read Tit For Tat Story. 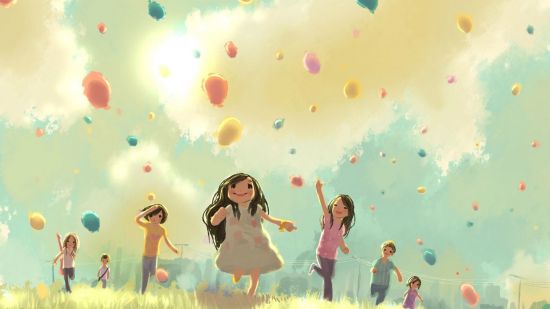 story with a moral

The next day, the children were all set for their second attempt. John again thought for a while but this time he chose red. He does so because previously the boy with red balloon had won. When all of them let go of their balloons, John did not win. This time while going back home, he burst into tears.

On the third day, they decided to play the same game. This time, John badly wanted to win. John was totally confused about which color should he choose. He did not know which would go the highest, so he decided to ask the balloon seller. “Uncle, please tell me which balloon will reach highest in the sky? Is is blue, green or yellow?” You may also like to read, United We Stand Divided We Fall Story.

On hearing this, the balloon seller smile and said, “Son, it’s not the color which decides how high it will go in the sky. What matters the most is what the balloon has inside it. The balloon which has more gas will reach the highest.” The balloon seller handed John a balloon that had more gas than the other balloons. That day, John finally won the game and went back home with a big smile on his face.

MORAL OF STORY WITH A MORAL: HOW HIGH A PERSON WILL REACH IN HIS LIFE DOES NOT DEPEND ON HIS/ HER CASTE, COLOR, OR RELIGION, IT DEPENDS UPON HIS/HER THOUGHTS, CONFIDENCE, MORAL VALUES, AND CHARACTER.

Tagged with: children stories with morals, small moral stories, story with a moral