This is one of the very short stories for kids to read. Once upon a time, near the city of Banaras situated in India, there was a forest. In this forest, there were two herds of deer. Each herd had five hundred deer. And both herds had a king. One was known as the Banyan Deer while the other was known as the Branch deer. Both of them were beautiful and golden in color. Also, read The Sick Stag.

The king in the nearby kingdom loved to hunt and loved to eat meat at every meal. Not only did he hunt, he made his subjects do the same. Due to this, the businesses and the daily jobs of the loyal subjects suffered great losses. As a result, the subjects came up with a plan. They decided to turn the royal park into a deer park. 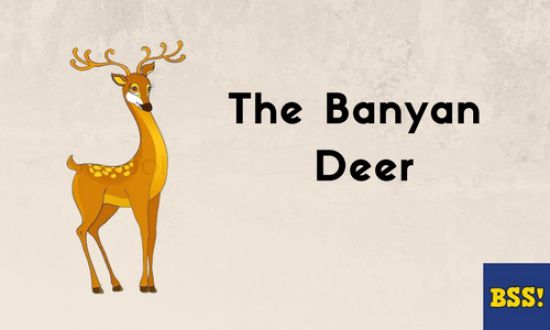 So, they dug holes and trenches. Next, they took sticks and went to the forest. They drove both the herds into the park and shut the gates. The deer were trapped inside. Then, the subjects went to their king and told them that they did not want to go hunting anymore. They also told their king about the deer park they had created for him. The king’s eyes gleamed at the idea of the deer park.

At once he went to see the park with his own eyes. When he reached the park, he saw the two golden deer. Their utmost beauty made the king pass an order that no matter what happens no one will kill the two golden deer. So, every day the soldiers would shoot arrows and kill a deer. All of this made many of the other deer injured.

After a while, the two deer kings came together to think of a plan. They decided that both of them would send one deer each. In this manner, the number of wounded deer would go down. This continued for a while. You may also like to read, The Deer Who Played Truant.

Then, one day, it was the turn of doe. This doe had just given birth to a child. She went to her king, Branch deer and asked to be spared until her child was old enough. But the king would not listen to anything. She then went to the Banyan deer. The Banyan deer heard her compassionately. He then told her not to worry. The banyan deer took the mother doe’s place. When the butcher saw the golden deer approach, he ran to the king.

The moment the king heard about the golden deer coming to sacrifice himself, he ran out to see the deer. Upon seeing the deer, the king asked for a reason. The Banyan Deer told the king about the mother doe and her child. “I understand. I will spare your life as well as hers,” the king said. But the Branch deer did not find this fair.

The branch deer demanded freedom for all of them. Upon thinking carefully, the king granted them their wish. The king stopped hunting and spared the lives of every animal in the forest. Also, read The Clever Deer.