The Bear And The Bees

This is one of the awesome aesop fables short stories. One morning, a crane was having breakfast at the stream. He dipped his long beak in the water and caught tasty fish. A few steps away, a rabbit was munching on a carrot. “Crunch! Crunch! Crunch!” he chewed the delicious juicy carrot. Right beside a stream sat a hungry bear. He had nothing to eat. Also, read Aesop Fables For Children. 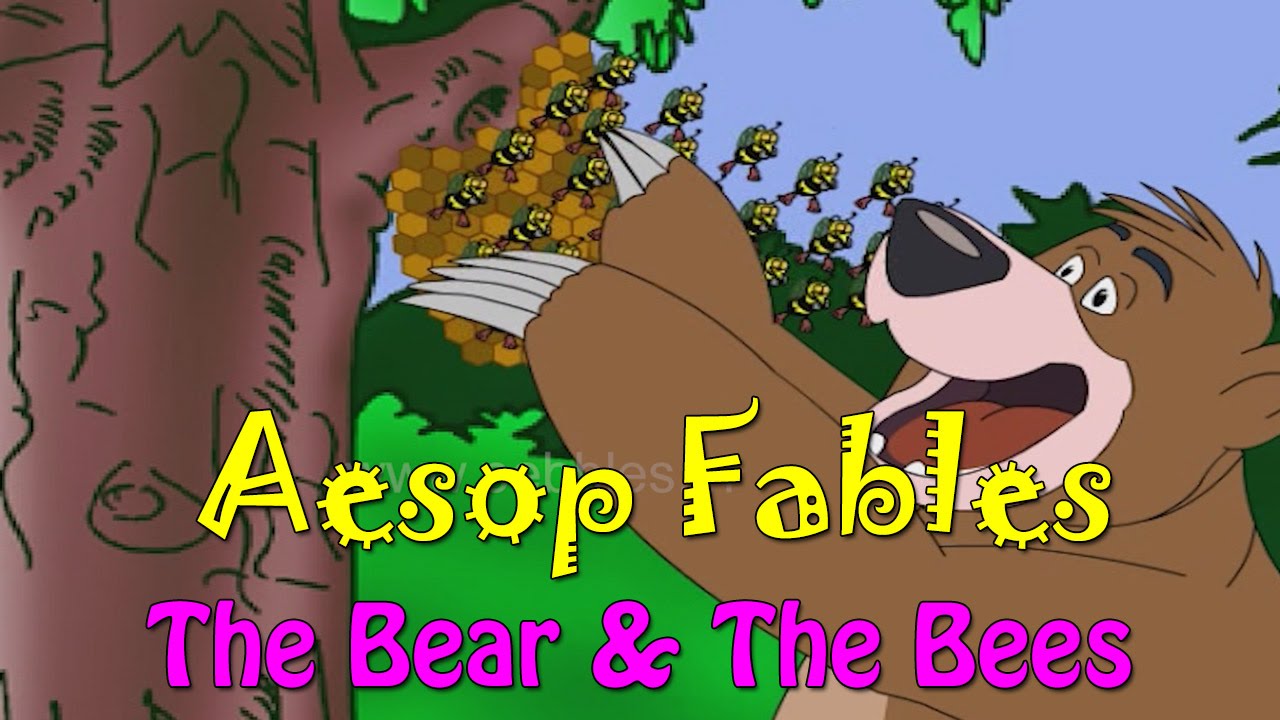 The hungry bear roamed about the forest, but for miles, there was no trace of a bee hive. He dragged his legs along the path but the pangs of hunger were now becoming unbearable for him.

Suddenly, the bear saw something and his eyes twinkled. “That looks like a honeycomb,” he thought. “Let me go near and see!” It was indeed a bees hive hanging from a low branch of a tree. The bear was overjoyed. He licked his lips. Luckily enough, there were no bees inside the hive.

Just then, the bees returned after their hard day’s work. As they came nearer, they saw that the bear was trying to steal from their hive. “Umm… That will be delicious,” the bear thought to himself. “Catch the thief,” the bees cried out. And the angry bees swarmed towards the bear. The bear had no option but to give up the idea of eating the honey. The bees chased him away from there.

But the bear could not take this defeat. He grumbled, “Ah! My precious food got out of my hand. All because of that bees!” And the bear decided to revenge upon the bees. “I’ll destroy the honeycomb and the waste the honey. If it’s not mine, it will not belong to the bees either,” he uttered. You may also like, The Ass And His Masters.

Thinking this, the bear stealthily came under the bee hive and tried to buck it down. “They might have gone out to work. I shall lick all the honey before the bees return,” thought the bear. The bear jumped up, trying to snap up honeycomb.  But he was unable to reach up.

And the clever bees were watching all this from behind the branches of the tree. “How dare you come back, you greedy bear? I shall teach you a lesson,” they buzzed of anger. When the bear saw so many bees pointed towards him, he started running away.

But before he could get away, from there the bees had gathered around him. “Attack!” commanded the queen bee. The bees stung the bear all over his body. “Ahh! Eee!” the bear cried in pain and he ran for his life. The bees chased him.

At last, the bear jumped into the stream and immersed himself completely into the water. The bees could not find the bear and so, they returned to their hive. After some time, the bear emerged out of the water. His whole face and body wounded with the bees stings. That day, he learned a lesson and swore never to steal honey from the bees again.

MORAL: DO NOT STEAL AS STEALING IS BAD ‘OR’ IT IS ALWAYS BETTER TO BEAR A LITTLE SUFFERING SILENTLY.

Here is a visual depiction of one of the great aesop fables short stories, ” The Bear And The BeesStory”. See the video story below,